OPINION: Republicans may not be prepared to cover for Rep. Matt Gaetz, but condemning racists in their ranks is an entirely different story 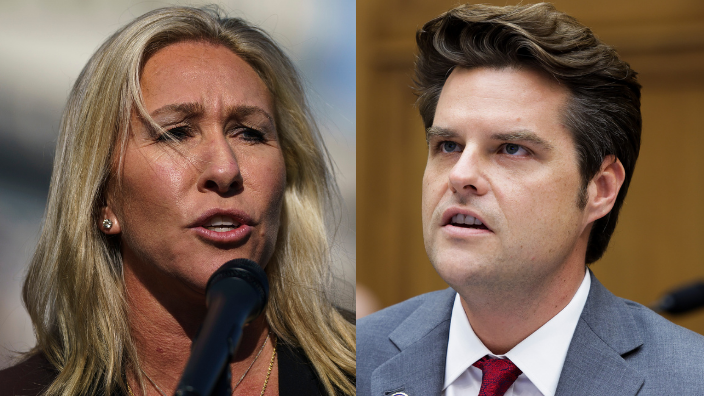 The Justice Department investigation into Rep. Matt Gaetz (R., Fla.) for alleged child sex trafficking may be a bridge too far, even for the scandal-plagued Republican Party, whose standard-bearer, Donald Trump, has had numerous sexual assault allegations against him.

While the GOP may not be prepared to cover for their colleague from Florida’s 1st district amid allegations that he, a grown man, had sexual relations with at least one 17-year-old, condemning racists in their ranks is an entirely different story.

After all, in a political party that breaks bread with racists, promotes white supremacist policies and participates in insurrections, racism is an important part of their brand.

Within 24 hours after news of Gaetz and the federal sex trafficking investigation, House Minority Leader Kevin McCarthy (R., Calif.) told Fox News that while it is too early to judge, he will remove Gaetz from his committee assignments if the allegations are proven true.

The GOP’s double standard was on full display in February, when McCarthy and all but 11 Republican lawmakers voted against a resolution to remove QAnon conspiracy theorist Rep. Marjorie Taylor Greene from her committee assignments for her racist, antisemitic, Islamophobic and other incendiary statements.

And as a purveyor of white nationalism and antisemitism, Gaetz provided ample reason for his Republican leadership to discipline him for his own racism. On Fox News, Gaetz has promoted the “great replacement” theory, the white supremacist conspiracy theory that people of color and immigrants are an existential threat to white people, and want to replace white people in America.

Gaetz also told Fox‘s Judge Jeanine Pirro that Black Lives Matter protests were part of “an attempted cultural genocide going on in America right now,” and claimed, “the left wants us to be ashamed of America so that they can replace America.”

And yet, according to a report from the Acre Action Center on race and the economy, Wall Street lobbying groups fill the coffers of Gaetz and other racist politicians and enable his white supremacy. Gaetz has received thousands in financial contributions from the American Bankers Association, the American Financial Services Association and the Credit Union National Association.

“The finance industry is aiding and abetting the rise of violent white supremacy and nationalism by donating to the congressional campaigns of candidates who have expressed viciously racist, xenophobic, sexist, and homophobic views,” said the report. The report also noted that Gaetz called Haiti a land of “sheet metal and garbage,” invited Chuck C. Johnson, a Holocaust denier, to the State of the Union, and promoted the antisemitic conspiracy theory that Jewish billionaire and philanthropist George Soros funded migrants to storm the U.S.-Mexico border.

Further, in 2015, as a Florida state representative, Gaetz singled out two Black state senators for ridicule, suggesting they were illiterate.

And Gaetz has thrived in an environment where Republicans trip over themselves and each other to appear more Trumpian and extremist than the next, all in an effort to appeal to their base — which includes QAnon tin foil hat folks, tiki torch carriers, Proud Boys, Oath Keepers, Confederate cosplayers, would-be lynch mobs, neo-Nazis and other domestic terrorists. Meanwhile, as they act racist and support racist policies, they gaslight the public and tell us racism does not exist.

Read More: Republicans will Jim Crow their way back to power if Democrats allow them

Sen. Lindsey Graham (R., S.C.), who has posed for photos with white nationalists, once said Black people can go anywhere in South Carolina if they are conservative. Graham threatened to filibuster the Democrats’ voting rights legislation, the For The People Act, and accused President Joe Biden of playing the race card by attacking nationwide GOP voter suppression efforts as “sick” and “Jim Crow in the 21st century.”

Speaking of which, Graham’s fellow South Carolinian Sen. Tim Scott (R., S.C.) — who would disappoint Black people in a world where Black people had any expectations of Black Republican senators — attacked critics who claim the GOP is using him as a Back prop. Outraged over cancel culture, Scott was caping for racists in his party when he said “woke supremacy is as bad as white supremacy. We need to take that seriously.”

Meanwhile, except for fellow travelers Marjorie Taylor Greene and Jim Jordan, Republicans have not jumped to the defense of Gaetz, who apparently has few friends in Washington. Republicans were silent when he spewed his racism, but the child sex trafficking allegations could be his undoing.

After all, Matt Gaetz is a member of a party that has decided to lean in and double down on white identity politics. While the GOP cannot ignore sex trafficking, they care little about racists in their ranks, let alone the laws and measures designed to combat racial injustice and discrimination in America. Republicans could expel all their racists, but if they did, few would remain.