A video has gone viral of a white woman in Missouri who insists she isn’t racist for not wanting her children to learn critical race theory.

The clip was captured at a “community conversation” Friday in Eureka, Missouri which quickly devolved to shouting.

Parents were present to protest the discussion of race in history and literature in the Rockwood School District, which has seen pushback against online learning and even had parents protest the school removing a “thin blue line”-altered image of the U.S. flag from baseball hats worn by the local high school team.

According to local reports, school superintendent Mark Miles and Brittany Hogan, the district’s director of education equity and diversity, are leaving their jobs at the end of the school year amid death threats.

“Just because I do not want critical race theory taught to my children in school, does not mean that I’m a racist, damn it,” the unidentified woman says in the short clip, which has gone viral after being captioned, “A racist.”

The video comes at the end of the woman’s longer remarks, in which she says, of her daughter, “she is one of the most innocent little girls in the whole world, and she has friends, Black and white kids in her classroom, and she doesn’t see any difference. I have actually raised my kids to love people and accept people no matter what.”

The meeting came after an internal memo leaked to parents on Facebook in which school officials advised removing the words “privilege,” “activist” and “democratic” from any online school lessons.

A man who lives in the community but has no have children in the district was among those who had his say.

“What we’re concerned about is that there’s propaganda being taught, and we’re sending our kids there to be taught basic math, history, science,” opined Kenneth Rosa.

“That’s not the type of things you should be pushing on children that have impressionable minds,” he said. “Those are college-type subjects that should be addressed at that age, as opposed to propagandize children to fan the flames, so to speak, in between children of different races.”

According to a local report, a woman who said Black children at a local elementary school have said they often feel uncomfortable at school was booed by the crowd. 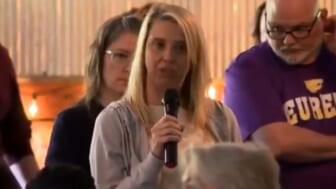