Vernon Jones: ‘Wish people recognized death of Jesus as much as George Floyd’

Jones' tweet garnered tens of thousands of likes, but also many comments attempting to parse out the rhetoric.

“I wish people recognized the death of Jesus Christ as much as they do George Floyd,” he tweeted. “That’s all I have to say.”

Lots to unpack here. Jones compared a Black man murdered by a police officer to the crucifixion of the Christian savior of the world.

His tweet garnered tens of thousands of likes, but also many, many comments that attempted to parse out the rhetoric.

Actress Holly Robinson Peete responded: “I really had to come over here to see if you actually said this. So extremely sad. Not unexpected. It was never about GF being a martyr or a saint it was only about him being a human being who didn’t deserve his life snuffed out. How tragic you are. But it’s owning libs so… (hand in face emoji).”

The most popular reply was from Rev. Dr. Chuck Currie of United Church, who commented simply: “Christian minister here. What is wrong with you?”

Many sarcastically reminded Jones of the many days of remembrance dedicated to Jesus Christ. One wrote, “Like If there was an annual holiday for it, maybe, and 40 days of associated remembrance every year before that? Imagine.”

“Maybe Christians could have a whole week dedicated just to the events leading up to Christ’s death and resurrection,” another added. “We could even give this very holy week a catchy name like ‘Really Important Religious Week For Christians.’ Just spitballing here.”

One detractor simply wrote: “He literally has a religion.”

Tuesday’s first anniversary of Floyd’s murder was recognized around America with peaceful protests and a continued push to pass the George Floyd Justice in Policing Act in Congress.

On May 25, 2020, Floyd was murdered by now-convicted former Minneapolis Police officer Derek Chauvin and three colleagues who have yet to stand trial. His death ignited a global response and push for reform in police departments across the country. Tuesday’s commemoration found many political leaders sharing remembrances and goals for the future. 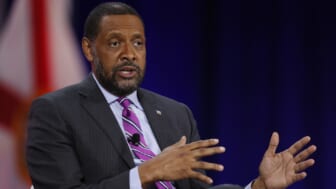 “George Floyd should still be alive,” said Massachusetts Sen. Elizabeth Warren. “I’m praying for his family as they carry the weight of today’s anniversary. And I’m committed to keeping up the fight to pass the George Floyd Justice in Policing Act as a step towards cementing the unshakable truth that Black Lives Matter.”

Jones went viral earlier this month after being interviewed by Marc Lamont Hill about his tweet in which he wrote: “On Day One, through executive order, I will immediately instruct the Georgia Department of Education to prohibit the teaching of Critical Race Theory within our public schools. It’s time for our schools to stop teaching our kids to hate America.”

The men argued in a debate that devolved to name-calling and ended with Hill muting Jones’ mic on his BNC show, Black News Tonight.