Will Smith writes handwritten note in support of Naomi Osaka

Smith wrote, "Hey Naomi. You are Right. They are Wrong! I am with You." He ended his note with a heart and his signature.

Multi-hyphenate entertainer Will Smith penned a note of support for tennis star Naomi Osaka, which he shared on his Instagram page.

In his note, Smith wrote, “Hey Naomi. You are Right. They are Wrong! I am with You.” He ended the letter with a heart and his signature.

Smith didn’t write a caption for the two-part post. The second part of the picture was a selfie of Smith holding the notebook in which he wrote the message.

There has been an outpouring of support for 23-year-old Osaka, who withdrew from the French Open after being fined for skipping a press conference; she’d stated in advance that press events between matches gave her anxiety.

In a statement to social media following her withdrawal from the tournament, Osaka wrote, “The truth is that I have suffered long bouts of depression since the US Open in 2018 and I have had a really hard time coping with that.” She said she’s suffered from social anxiety for years and that her condition was exacerbated by press conferences during tournaments. She added that while she was feeling “vulnerable and anxious” during play, she desired to skip press conferences as a form of “self-care.”

Osaka was fined $15,000 by the French Open for skipping a post-match press after defeating Patricia Maria Tig Sunday, and she withdrew the next day, saying that she hoped “everyone can get back to focusing on the tennis going on in Paris.” 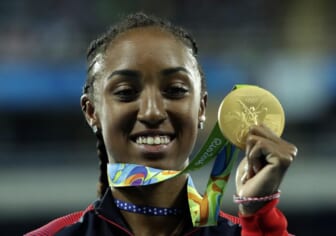 The meditation app Calm announced Wednesday it would pay the fines of any remaining French Open player who, for mental-health preservation, opts to skip media appearances during the tournament.

When asked how she deals with the pressure of speaking to the press, tennis legend Venus Williams went viral with an epic response: “For me personally, how I cope, how I deal with it, was that I know every single person asking me a question can’t play as well as I can and never will. So, no matter what you say or what you write, you’ll never light a candle to me.”

“That’s how I deal with it,” she added. “But each person deals with it differently.”