“The ceremony is held on your birthday and you always believed in me!“ Ahmaud Arbery's sister Jasmine shared.

Jasmine, whose instagram page is @berryso_sweet, took to social media to share a message of overcoming many obstacles to reach new milestones.

“Whew! A journey is not great unless you find what you seek,” Jasmine wrote. “My journey was filled with many challenges that included working two jobs, a natural disaster, the tragic loss of my brother, a pandemic, giving birth, anxiety, grief and issues with my financial aid.”

Jasmine graduated with a Master’s degree specializing in Clinical Mental Health Counseling from Albany State University, according to her social media page. This inspiring recent graduate shared how her real-life experiences prepared her for her career path.

She continued to write, “But I am proud to say those challenges equal the factors that will make me an excellent therapist. I have the opportunity to offer support based on real life experiences.” 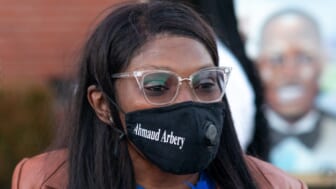 With her beautiful orange dress and blue ribbon featuring a button of Ahmaud smiling, she posed fiercely in her graduation photoshoot.

She concluded the post with a dedication to her brother.

“I dedicate this degree to my brother #AhmaudArbery,” Jasmine wrote. “The ceremony is held on your your birthday and you always believed in me! #BlackLivesMatter”

Supporters honored the moment with Jasmine, who is a member of Sigma Gamma Rho, and dropped congratulatory messages, like “Congratulations Soror!”

Watch The Yard, a page dedicated to centering Black fraternity and sorority news, culture and history, highlighted Jasmine’s accomplishments on their platform.

“Ahmaud Arbery’s sister is an SGRho,” @watchtheyard tweeted. “Her graduation ceremony from Albany State University was held on the same day as what would have been his birthday and she dedicated her degree to him.”

As theGrio previously reported, Ahmaud was shot on Feb. 23 while jogging in the predominantly white neighborhood of Brunswick, Georgia after an armed father and son duo, Gregory and Travis McMichael, pursued him in their truck.

It took two months and national outcry before authorities arrested Gregory, a former police officer in the town, and Travis.

William “Roddie” Bryan, who lives in the same subdivision as the McMichaels, recorded the video of Ahmaud’s shooting from the cab of his vehicle. The leaking of the video ultimately led to the McMichaels’ arrests.

Per The Associated Press, the Justice Department charged both the McMichaels and Bryan, who are all white, with violating Ahmaud’s civil rights as well as attempted kidnapping for using their trucks and guns to try to detain him on April 28. The McMichaels were also charged with using firearms in the commission of a crime. The federal indictment says all three men illegally used force to “injure, intimidate and interfere with” the young Black man “because of Arbery’s race and color.” If convicted of interfering with Ahmaud’s rights, they could face a maximum sentence of life in prison.

All three men have also been charged in a separate state proceeding with malice murder, felony murder, aggravated assault, false imprisonment and criminal attempt to commit a felony, per the U.S. Department of Justice.