Judge asked to order arrest of witnesses in triple-slaying

Tevin Biles-Thomas, the brother of Simone Biles, is charged in Cuyahoga County with murder, voluntary manslaughter and felonious assault

Prosecutors in Ohio asked a judge to issue arrest warrants for three witnesses sought in the retrial of the brother of Olympic gymnastics champion Simone Biles in a deadly 2018 New Year’s Eve party shootout that left three men dead. 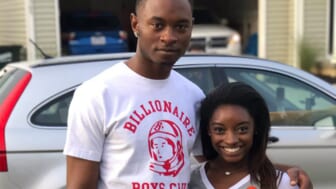 Tevin Biles-Thomas is charged in Cuyahoga County with murder, voluntary manslaughter and felonious assault; prosecutors on Tuesday dismissed a perjury count. The U.S. Army soldier’s first trial ended in a mistrial last month, after jurors were inadvertently given legal paperwork related to the case.

Authorities said gunfire broke out at the Cleveland party in 2018 when a group of men arrived uninvited. Nineteen-year-old DelVaunte Johnson, 21-year-old Toshaun Banks and 23-year-old DeVaughn Gibson were killed.

Cleveland.com reports that prosecutors told a judge last week that they have been unable to find the only witness who reported seeing Biles-Thomas fire a weapon. Prosecutors also said they cannot find two other witnesses, including one man who was shot in the head.

Last month, the judge issued arrest warrants for two witnesses who failed to appear to testify during the first trial; both took the stand later in the day wearing handcuffs, ankle chains and jail uniforms, Cleveland.com reported.

Prosecutors told jurors Thursday that two men got into an altercation and Biles-Thomas pulled a gun and opened fire. Authorities allege that one of the men who had been scuffling returned fire, killing the other, and Biles-Thomas then shot two others and fled. Police never found the guns and found no bullet casings with Biles-Thomas’ DNA.

Defense attorney Joe Patituce told jurors Thursday that Biles-Thomas didn’t fire any shots and was wearing a jacket of a different color than witnesses described. He also attacked the credibility of a key witness, saying he had gotten “the golden ticket” of leniency in that case and another one after agreeing to implicate the defendant.