A Brooklyn, New York mother is being accused of throwing her toddler and infant out of a second floor window, before jumping herself. 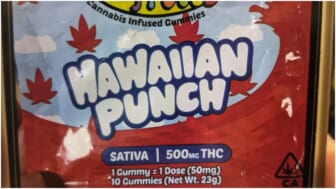 New York City police were called to the Rockaway Parkway near Winthrop Street apartment on Saturday around 11:24 a.m. The family has been hospitalized at Brookdale Hospital and is expected to survive, though the one-month-old girl is in critical condition, per New York Daily News.

“I’m hearing screaming like somebody died,” said a neighbor, Dawn Allen, 42, about sounds heard coming from the apartment 24 hours before the incident. “Then I heard a thump. I peep outside, but I didn’t see anybody.”

The 24-old-mother, identified as Dejhanay Jarrell first pushed out an air-conditioning unit to throw her baby girl out of the window. She landed on the ground facedown. She then jumped out of the window naked after throwing her two-year-old son out. The cause of the incident is unclear.

Carl Chin was an eyewitness to the event and saw the children on the ground, per ABC 7 NY.

“The 2-year-old, he looked fine. He wasn’t crying, he wasn’t moaning in pain, but the infant looked like she was going in and out of consciousness because her eyes were- she was trying to open her eyes and they were closing. Like half of her face was bruised,” said Chin.

Another neighbor said they did not know the woman had children and thought that she lived alone. Jarrell and her children had not been living at the residence that long.

According to Allen, the family was not heard from much before the incident.

“I never heard a noise coming from the apartment. She’s quiet,” said Allen. “You couldn’t see anything to know that something would be happening to her one day.”

Witnesses also say Jarrell bashed one of the children’s heads into the ground repeatedly after they fell.

“All of a sudden I heard sirens,” Andre Jones, 54, told the New York Daily News. “I saw them dragging her [Jarrell’s] body out of the basement area, and I saw EMTs running everywhere.”

He later placed a guardian angel candle and a doll where the incident occurred.

“Nobody is able to make sense of it at all,” he added. “It’s a nightmare.”

According to New York Daily News, just 18 months prior, another tragic incident took place in the same apartment. A transgender woman, Yahira Nesby, 33, was fatally shot there on Dec. 17, 2019.

Her alleged boyfriend was found injured in the back of the building after jumping from a window around the time of the shooting. He was questioned but not charged.

Though police retrieved surveillance video of a man they believe is the shooter, no arrests have been made yet.

Neighbors are still traumatized over the shooting.

Nesby grew up in North Carolina before she moved to New York City to join the ball scene. She was a member of the House of Chanel and worked at Macy’s.