"There is no such thing as being moderate when it comes to protecting voting rights and lifting the poor and lifting low wealth people and providing health care, and providing living wages,” said Poor Peoples Campaign co-chair Rev. William J. Barber II.

On Monday, roughly 300 protesters marched to Senator Joe Manchin’s (D-WV) office in Charleston, West Virginia to demand his support for voting rights and a livable wage, and to end his support for the filibuster, which Democrats have been campaigning against, the Hill reports.

The march was led by the anti poverty organization the Poor People’s Campaign (PPC) and dubbed the ‘Moral Monday March on Manchin’.

“There is no such thing as being moderate when it comes to protecting voting rights and lifting low wealth people and providing health care, and providing living wages,” said PPC co-chair Rev. William J. Barber II at the march. 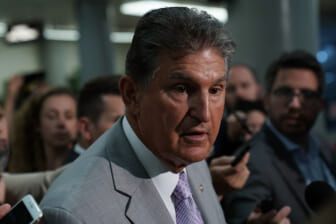 As theGrio previously reported, Manchin met with civil rights leaders earlier this month after publicly opposing the For the People Act, which is federal legislation aiming to expand voting rights and promote election integrity.

Earlier this month, Manchin wrote an op-ed in the Charleston Gazette in which he made his opposition clear saying, “I believe that partisan voting legislation will destroy the already weakening binds of democracy, and for that reason, I will vote against the For the People Act. Furthermore, I will not vote to weaken or eliminate the filibuster.” Manchin has also opposed the $4 trillion cost of the American Families Plan, The Hill reports.

Progressives have pointed to the wave of voter suppression bills signed into law across the country, the Republican Party’s repeated use of the filibuster to block legislation, and the dismal poverty stats in Manchin’s own state as reasons for the senator to support such reforms. In 2019, 16 percent of West Virginians lived in poverty, which is the sixth-highest rate in the nation.

On Monday, Barber highlighted some of these issues in an interview with MSNBC’s The ReidOut. “[Manchin] is serving the US Chamber of Commerce and not the Constitution, and by filibustering he’s blocking the things that his state needs,” said Barber. 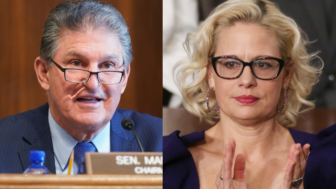 Manchin was reportedly in Washington during Monday’s march and said in a statement that his office staff was present “to listen to these important voices and relay their concerns to him,” The Hill reports.