Town that was a center of slave trade unveiling marker

A Rhode Island town that was a center of the transatlantic slave trade is commemorating Juneteenth by unveiling a new marker recognizing its role in slavery.

Officials on Saturday were placing the first of two planned slavery markers in town at the Linden Place Museum, a mansion built in the 1800s by General George DeWolf, a prominent merchant and slave trader. Another medallion will be placed later this month at DeWolf Tavern.

The slavery markers are being installed at sites around the state connected to the Transatlantic slave trade by the Rhode Island Slave History Medallion project. They’ve been placed at Smith’s Castle in North Kingstown, Bowen’s Wharf in Newport, and Patriot’s Park in Portsmouth, according to organizers. 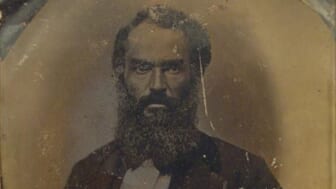 Students and faculty from Roger Williams University planned to discuss their original research into the town’s slavery legacy.

University officials say the work includes new information about the town’s lesser-known slave-trading families, as well as stories of enslaved Africans who lived and worked in town, such as Bristol Finney, a 19-year-old enslaved African who ran away from his owners.

Saturday’s ceremony was featuring music and dance from a local African performance group, and the museum was offering tours.