Widely considered the greatest gymnast of all time, Biles is headed to her second Olympics. The 24-year-old is the first to win the U.S. Olympics Gymnastics Trials twice for as far back as public records go, according to NBC Sports.

The Olympics are set to kick off July 23 in Tokyo, Japan after being pushed back due to the coronavirus pandemic.

According to The Washington Post, Biles told reporters that she felt relief after Sunday’s trials and “a lot more emotions going into it because of everything I’ve been through,” she said. “It’s been a long journey.” 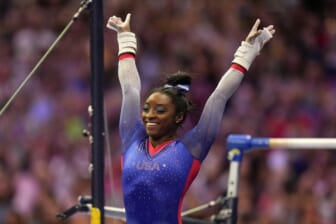 At 24, she and Skinner will be the eldest U.S. Olympic women’s gymnasts since Annia Hatch and Mohini Bhardwaj in 2004, who were 26 and 25 respectively. This year’s Olympics appearance will be Biles’ last, she later told reporters. “I’m just old; I’m always in pain,” Biles explained at the end of the night. “Something always hurts.” 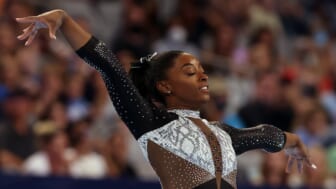 She had a few missteps in her performance, but Biles still had the highest points of the night. Nonetheless, she was seen crying on camera, lamenting her mistakes. “I was just really upset,” Biles told Joyce afterward. “Everybody out here came, gave their heart, and I didn’t give my best performance, so that’s what I was most upset about.”

Fans of their performances shared support for besties Biles and Chiles on Twitter. Chiles, 20, switched clubs two years ago to train alongside her friend, the first female gymnast in America to win a World Gymnastics medal in every event. “Tonight 2 Black women made Team USA Gymnastics: Simone Biles, Jordan Chiles,” one fan wrote. “It must be Power! It must [be] History!”