Lil’ Kim has no time for haters, even if they’re 50 Cent. In a recent Instagram post, the icon called out the “In Da Club” rapper for comparing her BET outfit to an owl, writing that she’s still “a bad b*tch.”

Lil’ Kim’s Prada-themed BET Awards look blew up on the internet. From memes to praise, the rapper was all over the timeline after her tribute performance for Queen Latifah.

One vocal critic of her look was rapper 50 Cent, who shared a meme of Lil’ Kim side by side with a white owl. Lil’ Kim took that same picture and shared it to her own feed, but this time added her own colorful caption to react to 50 Cent. 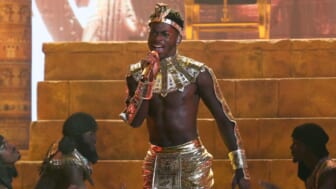 Lil’ Kim seems unbothered by the temperature of her caption. She wrote, “??The accuracy ?? Hilarious ? I ain’t bothered not one bit. My family & friends more mad than me. ? Sh*t like this don’t move me one way or another cause I’m still a bad b*tch that niggaz bitches, mommies, daughters, and aunties still want to be till this day and I love it!! ??.”

She continued by pivoting back to 50 Cent, detailing a past encounter in which she turned him down on a date. She wrote, “@50cent I see u still in ur feels about that dinner date u asked me on that I had to turn down. Let it go u have a beautiful girlfriend, I have a loving husband. Let it go. And for those of u coming at my husband, Mr. Papers, he did real nigga sh*t. What a husband is suppose to do. ??? All y’all can go to hell. Not Respectfully.”

She rounded out the caption by letting the rapper know she will be detailing their past in her upcoming book. She concluded, “50cent, I address that situation all in my book coming in November. Make sure you go get it. Pre-orders available now.  Be Blessed every one, stay positive.✨”

As theGrio previously reported, the rapper also made headlines by declaring she’d like to do a Verzuz with Nicki Minaj on the 2021 BET Awards red carpet.

The clip of her saying this immediately went viral on Black Twitter, with fans letting their opinions out there on who they think would win. One user wrote on Twitter, “Lil Kim and Nicki Minaj coming together for a Versuz will be so MONUMENTAL FOR HIPHOP! The culture needs it. Honestly. Swizz needs to cut that check for Nicki.”