“Whether they should remain the rules is a different issue, but the rules are the rules,” said Biden

President Joe Biden commented Saturday on the suspension of star sprinter Sha’Carri Richardson’s suspension from the Olympics over marijuana use.

Richardson punched her ticket to Tokyo this summer after winning the 100-meter race at the U.S. Olympic Track and Field Trials in Eugene, Oregon in June.

Shortly after the event, the 21-year-old sprinter tested positive for cannabis, landing her a 30-day suspension according to the U.S. Anti-Doping Agency (USADA).

“Richardson’s competitive results obtained on June 19, 2021, including her Olympic qualifying results at the Team Trials, have been disqualified, and she forfeits any medals, points, and prizes,” per a statement from the USADA.

THC was recently classified as a substance of abuse in 2021, and athletes typically receive a 90-day suspension for testing positive for such substances if used outside of competition with no effect on the athlete’s performance.

Per USADA, Richardson “successfully completed a counseling program regarding her use of cannabis,” shortening her suspension to 30 days. Her ineligibility period began June 28. 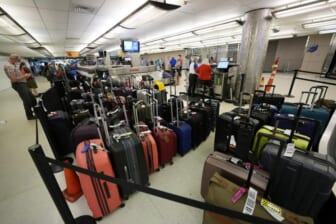 Also Read:
US plans to make airlines refund fees if bags are delayed

“Right now I’m just putting all of my energy into dealing with what I need to deal with to heal myself,” Richardson said Friday morning during an appearance on NBC’s TODAY show.

She added that she is taking full responsibility for her actions, and explained that she knew the rules, but smoked to cope with the recent death of her biological mother.

“I was definitely triggered and blinded by emotions, blinded by badness, and hurting, and hiding hurt,” Richardson said. “I know I can’t hide myself, so in some type of way, I was trying to hide my pain.”

“I would like to say to my fans and my family and my sponsorship, to the haters, too, I apologize,” she added. “As much as I’m disappointed, I know that when I step on that track, I don’t represent myself, I represent a community that has shown me great support, great love.”

Richardson is currently ranked sixth globally for the women’s 100-meter and is the top-ranked American woman for the event per World Athletics.

After posting a time of 10.86 seconds in the qualifier, she was looking to be the first American woman to win gold in the event since Gail Devers in 1996.

“The rules are clear, but this is heartbreaking on many levels,” said USADA CEO Travis T. Tygart. “Hopefully, her acceptance of responsibility and apology will be an important example to us all that we can successfully overcome our regrettable decisions, despite the costly consequences of this one to her.” 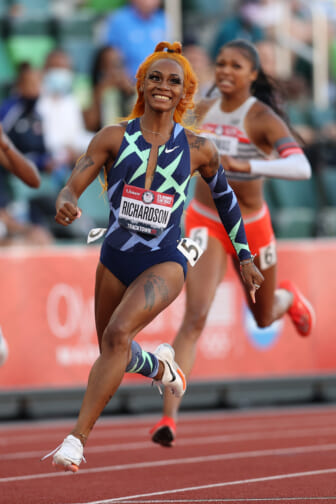 Richardson may still be eligible to compete in the women’s 4×100-meter race this summer in Tokyo.

“If I’m allowed to compete I am grateful, but I’m going to focus on myself,” Richardson said. “To my fans, family and haters, I apologize. I know I represent a community that shows great love and I failed you.”