According to TMZ, Kanye stayed in the venue after being inspired by the crowd at his listening party.

Kanye West is reportedly living in Atlanta’s Mercedes Benz Stadium to complete the recording of his 10th studio album, DONDA.

West hosted a listening party inside the stadium Thursday and has reportedly remained in the venue since. TMZ is reporting fan sightings of the superstar rapper-producer sporting the same red ensemble that he wore during his listening party — right down to the unusual stocking he has been wearing on his head.

According to the report, Kanye West has a recording space, living quarters and a personal chef in the arena preparing his meals, staying in the venue after being inspired by the crowd at his listening party last week. The rapper-producer gifted 5,000 tickets to faculty, staff and students from some Atlanta HBCUs, including Clark Atlanta University, the Interdenominational Theological Center, Morehouse College, Morris Brown College and Spelman College.

The sold-out event was livestreamed on Apple Music.

In the ad — which made its debut during Tuesday night’s NBA Finals game — Richardson is seen warming up to run with Beats Studio Buds earphones while “No Child Left Behind,” West’s new track, plays. The song features a haunting organ and West repeatedly singing, “He’s done miracles on me.” 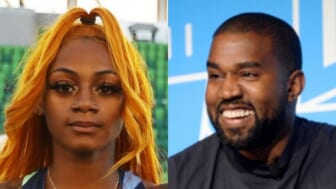 Although the album is not complete, fans were thrilled at the reunion of Kanye West and his former frequent collaborator: Jay-Z. On the song, “Guess Who’s Going to Jail Tonight?,” the rap mogul-entrepreneur seemed to criticize West’s past support of former President Donald Trump.

“I told him to stop all that red cap, we going home,” the Rock & Roll Hall of Fame inductee raps on DONDA‘s last track. Fans were also delighted by another line in Hov’s verse: “This might be the return of the throne / Hova and Yeezus, like Moses and Jesus.”