EXCLUSIVE: “The Summer of Activism” is underway with marches, protests and demonstrations akin to those of the 1960s as the blueprint to make Republicans move on the For The People and John Lewis Voting Rights Acts.

Reverend Jesse Jackson, who is living with Parkinson’s disease, and Reverend William Barber were arrested earlier this week in Phoenix, Arizona after refusing to leave the office of Democratic Senator Kyrsten Sinema. The two were part of an arrest of 39 people who demonstrated against her support of the filibuster that is being blamed for part of the delay on voting rights legislation on Capitol Hill in Washington.

On the Hill, Senate Democrats are huddling over one of the issues of the summer, efforts to strengthen voting rights that have been weakened by two Supreme Court decisions, one in 2013 with Shelby v. Holder, which gutted the Civil Rights Act of 1965, and another just this month that weakened Section 2 of the historic law and heightened the burden of proof for voting discrimination on the basis of race.

The issue has dominated meetings and conversations on both ends of Pennsylvania Avenue since the start of the summer, but picked up steam when Democrats in Texas fled the state to block attempts to limit access to the ballot in the Lone Star state. On Friday, the House Committee on Oversight and Reform met to review the Texas legislation that would change that state’s election laws making it more of a restrictive process. 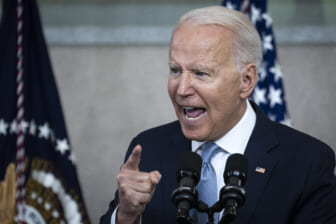 Democratic Congressman Kweisi Mfume of Maryland, who is part of that committee, tells theGrio that he thanked the Democratic Texas legislators for “their courage to stand firm against the bigoted attempts to restrict the right of all people to vote free of intimidation.”

“The big lie and the new Jim Crow voting laws that we are fighting back against are the ugly remnants of the Donald Trump era. They must be defeatedl,” added Rep. Mfume.

In a written statement, NAACP President and CEO Derrick Johnson said, “As the courageous representatives from Texas stated before the House Oversight and Reform Committee today, the fight to preserve the right to vote is a fight to preserve American democracy.”

“We call on our nation’s leaders to seize this urgent moment and act in unison to ensure all Americans have a voice in our future. We have not only a constitutional obligation, but a moral obligation to protect and defend the right of every American to freely and fairly participate in our democracy. The U.S. Senate must act now to protect American democracy,” added Johnson.

The hold up in the Senate to pass the For The People Act and the John Lewis Voting Rights Act — two bills intended to put teeth back into the Civil Rights Act of 1965 andthe nation’s overall voting integrity — is said to ultimately be Republican Senate Minority Leader Mitch McConnell.

The continued roadblocks over voting rights and the changes to the Civil Rights Act have prompted an immediate response of activism.

“The Summer of Activism” is underway with marches, protests and demonstrations akin to those of the 1960s as the blueprint to make Republicans move on H.R. 1 and S.1.

“The significance of members of the Congressional Black Caucus engaging in civil disobedience and being arrested is to highlight for the nation how crucial voting rights is as a lifeline to people of color,” Jackson Lee told theGio following her arrest.

“As a member of the Judiciary Committee who has helped write the voting rights reauthorization in the time that I’ve served in the United States Congress and watched every successive voting rights reauthorization have votes like 98 in the Senate, 400 plus in the House — numbers that reflect that voting rights is a constitutionally fundamental right and a birthright — how we have gotten into the crisis of today is the toxicity of the former president and the toxic nature of race relation.”

“No one ever said that the fight to protect our voting rights would be easy. We’re fighting Jim Crow 2.0,” said Rev. Lennox Yearwood Jr., president and CEO of Hip Hop Caucus. He underscored the urgency many civil rights leaders are pressing the White House on what is being described as a present-day Jim Crow facilitated by the filibuster.

“We’re prepared to roll up our sleeves to stop voter suppression bills anywhere that blocks voters of color, seniors, or those with disabilities from the ballot. Our democracy and our communities depend on it. The stakes couldn’t be higher,” Yearwood added. 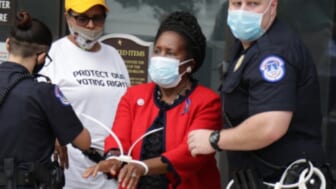 Since the start of 2021, 30 anti-voting bills and counting have been enacted. To address the attack on democracy, on Thursday House Speaker Nancy Pelosi and leaders of the NAACP held a call with legislators from Georgia, Michigan and Ohio to strategize immediate federal action on protecting the right to vote.

Cora Masters Barry, the widow of late D.C. Mayor Marion Barry, cried in the Hart Senate Office Building weeks ago when her fellow colleagues were arrested for peacefully marching and singing in protest of the current state of voting rights in this nation.

Ms. Barry lamented that she is upset to be back in this place after marching in the 1960s for voting rights.

The public face of voting rights has been that of Black people thus far in the modern fight for democracy, but various coalition groups contend the new restrictive laws impact all groups from the disabled to Latinx to Asians, as well as white America.

“Every single person in this country is touched by the right to vote,” said Congresswoman Lisa Blunt Rochester, an at-large representative for Delaware. “[Voting] is tied to everything that is on the line.”