Andre Hunt, one of two former University of Nebraska football players implicated in an alleged sexual assault in 2019, has been ordered to pay a $1,000 fine for a misdemeanor charge of false reporting.

He was sentenced Friday, three months after former teammate Katerian LeGrone was found not guilty of sexual assault in the case.

Hunt was initially charged with first-degree sexual assault but later pleaded no contest to the misdemeanor charge.

During LeGrone’s trial, Hunt testified that he lied to investigators when he said he never saw LeGrone have sexual contact with the 19-year-old woman, The Omaha World-Herald reported. 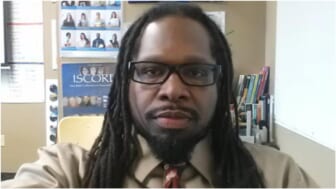 In his ruling, Lancaster County Judge Thomas Zimmerman said he was required to sentence Hunt based on the charge for which he has been convicted and can’t impose punishment based on unproven allegations.

Zimmerman said Hunt, who has no prior criminal record, was unlikely to reoffend.

Hunt, who returned home to Los Angeles after being suspended from Nebraska’s football program in 2019, appeared at the hearing via Zoom.

Hunt and LeGrone were expelled from the university in April 2020 after a Title IX investigation conducted by the school concluded they had violated the university’s sexual misconduct policy.