Alexis Nikole Nelson is bringing foraging into the mainstream

The 29-year-old has gained a TikTok following of over 1.7 million for her witty and educational videos about foraging for food

When Alexis Nikole Nelson was first introduced to foraging at five years old, she didn’t know she would go on to become a viral TikTok sensation known as the Black Forager to 1.7 million followers around the world.

The 29-year-old told Columbus Monthly of a fond childhood memory where she was running around her mother’s Cincinnati, Ohio home garden. She eventually came across a collection of weeds that her mom helped her identify as onion grass, an invasive, yet edible grass that smells similar to an onion and tastes like chives.

“For some reason, that stuck,” Nelson said. “None of the other really cool organized gardening things really stuck. I was like, ‘No, I want to find more of these accident[ally] tasty plants.’”

Now based in Columbus, Ohio, Nelson has gained national recognition for introducing many to the craft of foraging, a practice in which a person or animal searches for food outside in the wilderness.

The New York Times published an article featuring Nelson on July 30, describing her as an “urban adventurer” who makes “short, exuberant videos about edible finds in the woods.” Bon Appétit published a similar article earlier in March, headlined: Alexis Nikole Nelson Is Making #ForagerTikTok Our Favorite Place to Be.

“Everyone was afraid of going to the grocery store when I started my TikTok foraging videos in April 2020,” Nelson told Bon Appétit. “So I thought: Hey! Here are a few plants that are really common and probably growing in your neighborhood that you can gather, and maybe that’ll stretch your groceries a bit.”

She added that she typically goes foraging “between two to five times a week on average,” less often during winter and nearly every day during the peak of summer.

On her escapades, Nelson uses her extensive foraging knowledge to gather edible plants including leaves, berries, herbs, seeds and more, then brings them home and uses them to create a wide variety of dishes. She documents every step of the way and edits the footage into minute-long videos weaving in foraging education with her signature sense of humor.

In one video, she documents herself creating a sorbet dessert out of an invasive plant underneath her porch called Japanese knotweed. In another, she picks unripe black walnuts from a tree and turns them into a unique version of nocino, a spiced Italian liqueur. Some of her videos even include original songs she writes to educate her fans about plants like cattails and sassafras.

Nelson said she used to “dream of being a pop star… by night and a scientist by day,” singing in choirs from age three through junior high school, singing acapella in high school, and being a member of the ukulele club at Ohio State University, from which she graduated in 2015 with degrees in environmental science and theatre.

“I was never a prodigy, but music brings me so much joy, so I love being able to sneak that into my TikTok videos,” Nelson said. 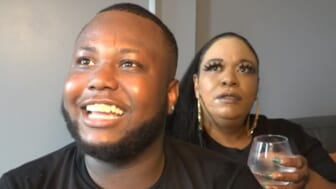 Patrick Hurley, professor and chair of Environmental Studies at Ursinus College reports that the practice of foraging has gained popularity since the beginning of the pandemic, which Nelson can likely take partial credit for.

“There are clearly new folks getting involved in the practice, and it seems to be for a variety of reasons,” Hurley said, referencing his local community in Philadelphia, Pennsylvania.

Nelson said that as a Black, queer woman, she notices differences in the way she is treated compared to white foragers with social media followings.

“I’m not the person people expect to see excited about foraging, the outdoors, biology, botany, and history,” Nelson said. “I have delightful forager friends who are white, and I notice they don’t get questioned nearly as much as I do. That’s heartbreaking.”

Despite it all, she said foraging makes her feel like she is “part of something bigger,” adding that it helps her cope with depression.

“It all feels worth it when a follower sends me a thank-you message saying, ‘Because of you, while I was out walking I recognized this plant and it made me feel like my neighborhood was a cooler and happier place,’” Nelson said. “To be less unacquainted with plants or more connected to surroundings because of me is a huge win. We take better care of the things we know.”