According to a financial disclosure filed on Friday, The “Squad” member and lawmaker will be partnering up with Knopf Doubleday Publishing for her book which is set to be titled “The Cori Chronicles.” The book’s advance was approved by the House Committee on Ethics.

Bush, who is also a nurse, made history as the first Black woman to represent Missouri in congress after winning the 2020 election defeating Republican Anthony Rogers. She became a frontline protest leader, marching the streets of Ferguson after the shooting death of 18-year-old Michael Brown in 2014, and was one of the early faces of the Black Lives Matter movement. 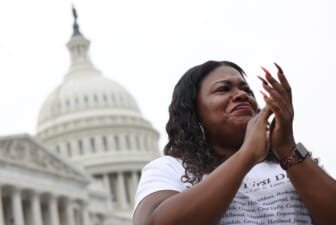 In an interview with ABC News last year, Bush revealed that initially, she had no plans on becoming an activist. However, the effects of Brown being murdered just six minutes from where she lived, along with feeling that she and the community both shared the same sentiments and emotions over the incident, prompted her to become active.

Bush is notably known for her heavy presence in advocating for defunding the police. She openly backed St. Louis Mayor Tishaura Jones in April when it passed a Board of Estimate and Apportionment vote.

“We are building a St. Louis where our streets are safe and our youth can grow and prosper — where we cannot just survive St. Louis, but thrive. I look forward to continuing to work in partnership with Mayor Tishaura Jones — and I commend her for her incredible leadership with today’s decision.”

Bush, 45, faced a lot of backlash and scrutiny on her strong stance pertaining to police reform while admitting to simultaneously having her own personal security.

Bush was asked by CBS News earlier this month on whether she felt if it was hypocritical that she spent approximately $70,000, according to campaign records, on her own personal security after advocating to defund the police, Bush responded:

“They would rather I die? You would rather me die? Is that what you want to see? You want to see me die? You know, because that could be the alternative. So either I spent $70,000 on private security over the last few months, and I’m here standing now and able to speak, able to help save 11 million people from being evicted. Or – I could possibly have a death attempt on my life,” Bush said.

She continued, “I’m going to make sure I have security because I know I have had attempts on my life and I have too much work to do. There are too many people that need help right now for me to allow that.”

Bush has yet to publicly confirm her book deal.