Twitter users took Richardson's words as dissing the most decorated American track and field athlete of all time.

After sprinter Sha’Carri Richardson was criticized on Twitter in the wake of her last-place showing at the recent Prefontaine Classic, Olympics bronze medalist Allyson Felix offered words of support during an appearance on Jimmy Kimmel Live!, guest-hosted by Stephen A. Smith.

In response to a question about Richardson, Felix said, “I know that she’s obviously been through so much, and I hope that she’s just supported. I hope people rally around her. Obviously, she has a great personality, and she’s brought a lot of attention to the sport, and I think she’ll be in the sport for a very long time.”

“I think just more than anything,” she added, “for all athletes, there’s so much that goes into it. Just give her the support that she needs.”

Richardson then appeared to throw shade at Felix, writing early Wednesday in an Instagram story, “encouraging words on tv shows are just as real as well nothing at all.” A second post read, “Be a good person, but don’t waste time proving it.”

Twitter users took the comments as shade toward the most decorated American track and field athlete of all time, and they pushed back.

“(If this is real) Someone really has to pull Sha’Carri to the side. She’s creating a lot of ill will for no reason. There’s prob no better mentor for a young (Black) female sprinter in the US than Allyson Felix,” one wrote.

“seeeeeee I’ve supported and defended Sha’Carri this whole time through everything but what she NOT FINNA DO is play with Allyson Felix top,” maintained another.

A third tweeted, “Sha’Carri is stupid. That’s it, that’s all. You f**k up an Olympic bag, come in dead last after talking so much sh*t and now you wanna throw subs to Allyson Felix who said nothing but positive remarks about you? Man shut up.”

Some track fans still support the young Richardson, with one tweeting, “Sha’carri is 21. That’s literally a youth. Like, by definition…and socialization. Like, I’ve had young people her age in drop-in programs. Black youth will always get grace, patience, love, and opportunity to grow from me, in this world that grants them none.”

Texas native Richardson went from one controversy immediately into the next when she liked a controversial tweet about the three Jamaican sprinters who finished first, second and third at the Tokyo Olympics. She was barred from participating after testing positive for THC. 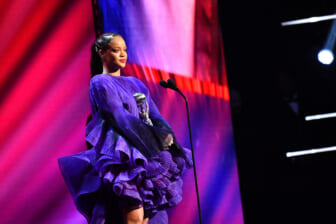 “Not y’all Jamaicans still talking s*** when y’all gotta walk barefoot to your coconut stand everyday for a living,” the now-deleted tweet said.

The offensive post was “liked” by Richardson’s verified Twitter handle, although it can’t be confirmed that she was the one who hit the heart feature.