The departure of Welteroth, a former Teen Vogue editor, is the second from "The Talk" host roster in two weeks.

Welteroth and Kloots joined its panel in January after Eve left.

“It is an absolute honor for anyone, but especially a young Black woman, to occupy space on-air where our perspectives are largely underrepresented,” she said Tuesday in a statement. “It was gratifying to be able to show up as my authentic self in front of a live national audience every day in a world as divided as ours and to stay true to myself and what I stand for.”

“I came to The Talk to break out of my own echo chamber and to join a diverse cast in helping to bridge some of the divides in our world through conversation and empathy,” she continued. “I’m proud of how I represented myself and my community. But as I always say: when the music changes, so must your dance! I will miss my talented co-hosts and crew and I wish them the very best. Thanks to all those who tuned in every day.” 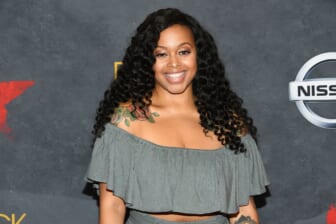 “I’m excited to continue these necessary conversations in my work,” Welteroth said, “and to share my upcoming creative projects soon.”

She is currently developing her 2019 memoir, More than Enough: Claiming Space for Who You Are, for a television show at Paramount, plus is also a judge on Season 19 of Project Runway.

Additionally, Welteroth is the consulting editor-at-large for Verizon Media’s short-form video network In The Know and recently announced she is teaching a class on the elite subscription service, Masterclass, on how to uncover the traits that define passions, values, skills and talents, then harness them to custom-design a unique career path.

“As the youngest editor-in-chief hired at Condé Nast and as a leading expert and advocate for the next generation, Elaine has shown that it is possible to build a sustainable career that feeds your soul and individual desires,” said David Rogier, founder and CEO of MasterClass. “With millions of people currently reevaluating their career paths and direction, Elaine gives members the tools and advice needed to create their own path, whether they’re looking to pivot or take a leap toward uncharted territory.”

The executive producers at The Talk had only good things to say about Welteroth in a joint statement provided to People magazine upon the announcement of her departure.

“We wish Elaine all the best,” Heather Gray and Kristin Matthews wrote. “We are grateful for her passion, enthusiasm and insight she brought to the show daily. Her openness and meaningful conversations were attributes we admired and always appreciated.”