Rap superstar Drake has put up billboards across the nation previewing the artists featured on his highly-anticipated seventh studio album, Certified Lover Boy.

The street signs are popping up in the hometowns of the featured artists, including New York, Chicago, Atlanta, Los Angeles and Memphis.

A board in Houston reads: “Hey Houston The Hometown Hero is On CLB,” so fans are speculating that the unnamed artist is likely Travis Scott.

Drake is releasing a series of Nike merchandise items to support CLB, including several T-shirts with phrases that have appeared on other billboards to support the album. One of them bears a “Should’ve Said You Loved Me Today Because Tomorrow is a New Day” spell-out on the back. The second’s message is “Something Other Than Me Has Got to Give,” and the third tee says “I Don’t Miss…Let Alone Miss You.”

Frequent collaborator and Young Money founder Lil Wayne hasn’t been announced as a featured guest on Certified Lover Boy, but he recently recognized Drake during a fan Q&A last week in celebration of the 10th anniversary of Tha Carter IV. 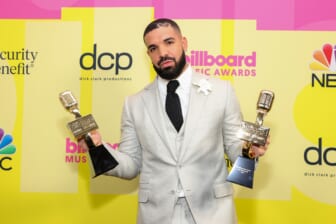 “Everything Drake send back, I always have to go back and re-record,” Lil Wayne said, per HipHopDX. “It’s always too hot. It’s always because he says something at the end that make me be like, ‘Oh, I could make more of the song and capitalize on what he just said.’ I have changed my verse a billion times because of Drake, and that’s always the person.”

As previously reported, Drake confirmed the date Certified Lover Boy would hit the street this week in an Instagram post featuring a photo of a dozen pregnancy emojis and a caption reading: “CERTIFIED LOVER BOY, SEPTEMBER 3.”

The release of the Drake project comes less than a week after the release of Kanye West’s latest album, Donda. The two global superstars have reignited a beef between them that’s been brewing since 2018 when West got involved in the public spat between the Toronto native and New York emcee Pusha T.

In a verse on “Betrayal,” the new Trippie Red single, Drake said, “Ye ain’t changin’ sh*t for me, it’s set in stone,” referring to his own LP’s drop date.