President Joe Biden traveled to the Gulf Coast that is once again ravaged by a natural disaster event — this time by Hurricane Ida. The super storm made landfall on the same day that Hurricane Katrina devastated the region just 16 years ago and subsequently broke the levee.

President Biden will receive a drive-by tour and a briefing from local leaders on the impacts of the hurricane. He will also take an aerial tour of the hard-hit communities, including Laffite, Grand Isle, Port Fourchon and Lafourche Parish.

When the president comes back from Louisiana, he is scheduled to land at the airport in Philadelphia just miles from Center City, which is also still recovering from massive flooding due to Hurricane Ida.

Former Philadelphia Mayor Michael Nutter tells theGrio it is time for the United States to have some tough conversations on climate change as it surrounds these communities with crippling natural storms.

Nutter said after recovery, “we have to stop putting people in bad situations” as they navigate the insurance system.

People affected by storms could lose out if they do not have flood insurance, and in some areas prone to flooding, those types of insurance are not offered. Nutter reminds many Black and brown low income people, in particular, live in low-lying flood prone areas.

“Because of the severity of the weather events and things that have happened over time, that’s an even harder conversation. Should you be allowed to build there,” queried Nutter.

President Biden tapped Cedric Richmond, a senior advisor in his administration, to become the direct liaison between the president and communication of the needs related to recovery efforts in Louisiana.

Biden said at the White House on Thursday, “While FEMA is our lead for on-the-ground response, if there is something you need — needs my attention, Cedric is your direct line into the White House throughout this recovery.” 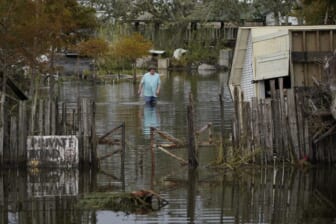 Biden trusts Richmond to be the most effective for this as he is a New Orleans native, and a former 10-year congressman in the Bayou State. Biden highlighted that Richmond “knows the area. He knows the people who have been affected by Ida, and he knows how to get things done in government.”

There is a colliding moment of crises at the intersection of climate change, natural storms and outdated, crumbling infrastructure.

Chicago Mayor Lori Lightfoot told theGrio it is time for people to accept that climate change must be addressed. “When you think about waking up in the morning and seeing that the New York subways are flooded, there’s flash floods happening all over the boroughs of New York City, you know that climate change is real,” said Lightfoot.

“Climate change is real, and we’ve got to take decisive action not to keep debating because the debate really is over.”