The vandals appeared to have tried to remove the late rapper's casket from the crypt and left the site covered in dirt, flowers and joints

The New York Police Department has launched an investigation after the burial site of the late rapper Pop Smoke was found vandalized over the weekend.

Vandals reportedly tried to drag the casket of late New York rapper Pop Smoke from his crypt late Saturday afternoon, according to a report from TMZ.

The outer wall of the marble mausoleum, engraved with the rapper’s name, Bashar Barakah Jackson, was smashed and nearly broken through, photos of the scene at Green-Wood Cemetery show. The resting place was also covered in debris, flowers and burned joints, reports say.

“An incident of vandalism took place on our grounds early Saturday,” Jeff Simons, the cemetery’s spokesperson, told The New York Post. “We immediately notified the authorities and are in touch with the family. Given the ongoing investigation, we cannot comment further at this time.”

Pop Smoke, who was gunned down in a Los Angeles home-invasion robbery in February 2020, was a 20-year-old Brooklyn-based rapper who was gaining notoriety from his debut mixtape Meet the Woo.

The death of Pop Smoke took the hip-hop community by storm, as many grappled with the loss of the young promising rapper.

Pop Smoke grew up in the Canarsie neighborhood of Brooklyn and turned hip-hop heads with his breakout single, “Welcome to the Party,” in 2019.

The song had much commercial success, drawing remixes from rappers Nicki Minaj and Skepta, and slated Pop Smoke to be the new face of the bustling Brooklyn drill scene. His second mixtape released in February 2020, Meet the Woo 2, built off of the momentum reaching number seven on the Billboard 200 albums.

The success, however, was ended abruptly when just 12 days after his album was released the rapper was killed while renting a Los Angeles mansion.

Early in the morning, five men in hoodies and a ski mask broke into the home. When authorities arrived after getting news of the home invasion, they found the promising rapper dead with several gunshot wounds.

Months later, four teenagers were charged in connection to the death including 19-year-old Corey Walker, 18-year-old Keandre Rodgers and 15 and 17-year old. 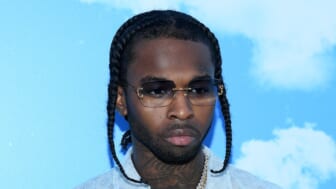 The vandalization of his gravesite happened between 2:30 p.m. on Friday and 2:00 p.m. on Saturday, TMZ reports.

In the witness photos, drag marks are seen on the ground of the destroyed crypt, indicating that the vandals tried to remove something from the site.

In another photo of what appears to be a concrete slab, presumably used to separate his body from the one above him, is perched along a bench at the mausoleum.

His plaque has since been replaced with a blank slab.

There is no confirmation that the casket was removed or intact, and the area is currently tapped off from the public.