Two minors each face one count of murder and robbery in juvenile court. 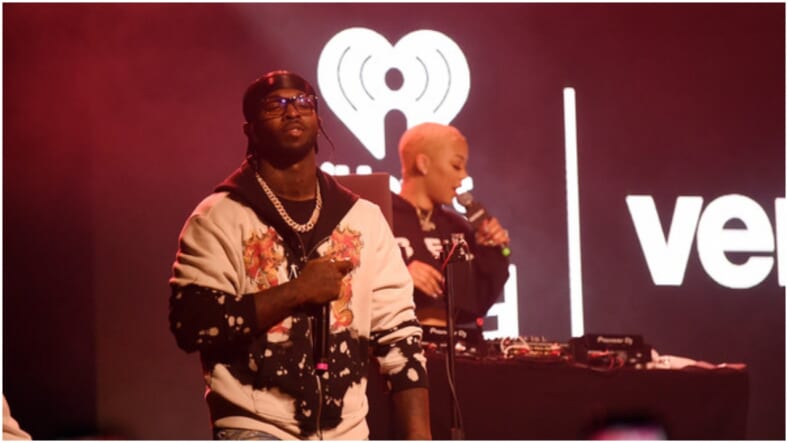 Four people have been charged in the death of rapper Pop Smoke, and two are minors.

On Monday, Corey Walker, 19, and Keandre Rodgers, 18, were each charged with murder with a special circumstance allegation that makes them eligible for the death penalty if convicted, CBS Los Angeles reports.

The two minors, ages 17 and 15, have not been identified. They each face one count of murder and robbery in juvenile court.

The ”Dior’ rapper, born Bashar Barakah Jackson, 20, was fatally shot in Los Angeles in February by, at that time, unknown assailants, in what appeared to be a home invasion, theGrio previously reported.

Four men wearing hoodies and masks entered the property firing shots. Speculation at the time centered on a home invasion because he posed with money on his Instagram account prior to the attack, according to multiple reports.

He also posted a pic with his address visible. Police said the assailants did not know the hip hop star personally, but were able to track him down using the photos he posted on social media.

A fifth person was reportedly arrested Thursday in connection with Pop Smoke’s death. It is unclear what charges, if any, that individual will face.

Walker and Rodgers are eligible for the death penalty because the murder occurred during the commission of a robbery and a burglary, the report states.

Prosecutors will decide at a later date whether to seek the death penalty against them.

Smoke was celebrated in a funeral procession on March 5 when his casket was followed through the streets of Brooklyn in a white, horse-drawn carriage followed by fans and residents with his music playing along.

His murder his reportedly still under investigation by the Los Angeles police.

Pop Smoke’s debut album, “Shoot For the Moon, Aim For The Stars,” was posthumously released earlier this month.