The second-youngest sibling in the famous singing Jackson family took to Twitter to defend Minaj's assertions.

The second-youngest sibling in the famous singing Jackson family took to Twitter to defend rap star Nicki Minaj, whose tweets about the coronavirus vaccine caused a stir on social media for days.

Randy Jackson, who was a member of The Jacksons, wrote on Twitter, “I support & echo @NICKIMINAJ’s intelligent advice to use prayer, critical thinking not be bullied into making a very important decision about your body & personal health.”

“It’s a sad day in America, he continued, “when we are censored, canceled & ridiculed for exercising our God-given freedoms.”

Replies in Jackson’s tweet are split, of course, with some agreeing with Jackson and a fair share who disagree.

One fan wrote: “Umm. why not sit down and talk with professionals in which the offer was extended instead of getting on social media before all ‘research’ is completed. No one is censoring be smart about what you put out when you have a big platform.”

Added another: “Just because you are exercising your God-given freedoms doesn’t exempt you from criticism and censor. Our hospitals are OVERWHELMED with unvaxxed Covid pts and CANCELLING & DENYING care to others. The personal decisions of the unvaxxed affect ALL OF US.”

However, one supporter wrote, “Speak on it !! @randyjackson8 many ppl agree with Nicki, but they just don’t hv the guts to speak on it publicly. Huge respect to you for spreading a light on it tho.” 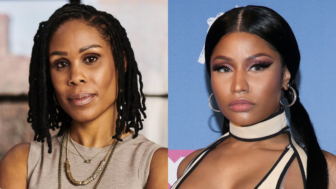 As previously reported, Minaj’s name started trending on Twitter after she shared that the Met Gala required proof of vaccination.

The 38-year-old rapper tweeted, “They want you to get vaccinated for the Met. if I get vaccinated it won’t [be] for the Met. It’ll be once I feel I’ve done enough research. I’m working on that now. In the meantime my loves, be safe. Wear the mask with 2 strings that grips your head & face. Not that loose one.”

She also later shared an eyebrow-raising story she claimed was related to an unusual side effect of the vaccine.

“My cousin in Trinidad won’t get the vaccine cuz his friend got it & became impotent. His testicles became swollen. His friend was weeks away from getting married, now the girl called off the wedding,” she tweeted. “So just pray on it & make sure you’re comfortable with ur decision, not bullied.”

Minaj’s Twitter assertions prompted replies from medical doctors, the CDC — even the government of Trinidad and Tobago. Dr. Terrence Deyalsingh, the health minister of the island nation, said Wednesday that his ministry “wasted so much time” Tuesday probing Minaj’s swollen testicles claim, noting there has been “absolutely no reported such side effect or adverse event.”

“But her tweet certainly did not help because people like her are social influencers, and they do carry some sway,” Deyalsingh said, according to local outlet CNC3. “So it certainly didn’t help and will make our job a little harder, which we don’t need right now.”