Yet again, fans are clamoring for Idris Elba to take on the iconic role of James Bond, this time after a video resurfaced of fan reactions from the 1995 film, Goldeneye.

No Time To Die, the forthcoming Bond movie, is set to be Daniel Craig‘s last film after over 15 years of playing the famous spy. While the film has yet to premiere, fans all over the world have been left to wonder who will take up the coveted role. For years it seems no actor has been rumored to take on the character more than British leading man Elba.

While no casting announcements have been made just yet, a video resurfacing containing fan reactions from 1995’s Goldeneye has Elba fans asking again for the actor to take on the role of the MI6 agent on screen.

Over the weekend, a James Bond fan account shared a video on Twitter of a publicity video from when GoldenEye, Pierce Brosnan‘s first film as Bond. It premiered in England back in 1995. The video features reactions from audience members on what they thought of Brosnan as Bond, and towards the end of the video, a familiar (and younger) face appears to give his take on the film.

After just seeing the film, a young Elba appears in the video along with his friend, and he breaks down his thoughts on Brosnan’s iteration of Bond. The young Elba shared, “He’s really good…he’s got all the charm. He’s got all the looks. And he’s fit and strong and blah, blah, blah. He’s all right.”

Brosnan of course went on to appear in three more Bond films, Tomorrow Never Dies (1997), The World is Not Enough (1999), and Die Another Day (2002) alongside Halle Berry. Four years later, Craig took on the role in Casino Royale (2006).

Elba himself is very aware of the James Bond rumors that have swirled around his career for years. In an interview with Robert Bruce on Capital XTRA earlier this year, he shared, “I know the rumors about Bond have always chased me.” He then proceeded to explain that even his mother is rooting for him to step in Bond’s shoes. 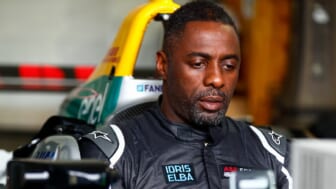 Check out his comments below: