The 25-year-old was heading toward a medical degree and a member of Omega Psi Phi, has been missing since his car was found abandoned on Aug. 26

A graduate student at Illinois State University disappeared last month and his family is desperate for answers.

Jelani Day, 25, was last seen on the morning of Aug. 24, according to the Bloomington Police Department, PEOPLE reports. His family reported him missing the next day after their unsuccessful attempts to reach him. The aspiring doctor also missed several days of classes, according to the missing persons report.

Day, a member of Omega Psi Phi fraternity, was seen on surveillance footage entering a store called Beyond/Hello in Bloomington. On Aug. 26, his white 2010 Chrysler 300 was reportedly found abandoned in a wooded area near the Illinois Valley YMCA. Officers with the Peru Police Department inspected the vehicle and found the clothing Day was wearing when he was last seen.

Day’s whereabouts remain unknown and an investigation into his disappearance is ongoing.

“Jelani has been missing for several days in unexplained suspicious circumstances,” a statement released by Peru Police read. “Jelani is described as a male Black, 25 years of age, 6 feet, two inches tall, 180 pounds with short black hair, brown eyes, and some facial hair.”

“This is my little brother,” he tweeted alongside a copy of the missing persons report. “He been missing for 3 weeks as of today now. Please help me and my family find him, one retweet can make a huge difference. I love him so much #FindJelaniDay I’m never giving up.”

Day’s mother, Carmen Bolden Day explained to Newsy, “We don’t have a lot of information.”

Day’s wallet was found on an unknown street, according to his mother. She says someone called police to say they saw an unidentified person drop it, but hours later, and she also says her son’s school lanyard was located near a river where an unidentified body was recently found.

“Jelani is energetic, he’s full of life, and he’s goal-driven,” Bolden Day told Newsy. “He knows what he wants and his goal was to be Dr. Jelani Day.” 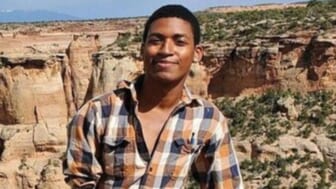 “I don’t feel like I am getting the help that I need,” she said.”I feel like since this body has been found, and as I said it is unidentified, I don’t truly believe that it is my son. It appears that help has ceased so I’m imploring, pleading, and asking that the police still pay attention, still look for my son as vigilantly as they were prior to finding this unidentified body.”

His fraternity is helping spread the word as well.