Bass represents the 37th district, which includes Culver City, Inglewood and neighborhoods in the city of L.A.

Rep. Karen Bass (D-Calif.) will run for mayor of Los Angeles according to “two people with knowledge of the situation.”

The Washington Post spoke with two anonymous Bass insiders who said she is likely to announce her run next week. If she does run, Bass will be up against L.A. City Council members Kevin de Leon and Joe Busciano, and City Attorney Mike Feuer.

Bass represents the 37th district, which includes Culver City, Inglewood and neighborhoods in the city of Los Angeles. 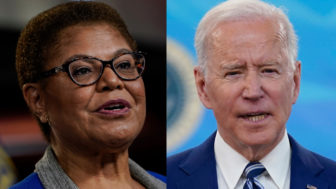 “Los Angeles is facing a humanitarian crisis in homelessness and a public health crisis in the disproportionate impact this pandemic has had on Angelenos,” Bass spokesman Zach Seidl said in a statement to The Hill. “She does not want to see these two issues tear the city apart. Los Angeles has to come together. That’s why the Congresswoman is considering a run for mayor.”

Bass said in an August interview with KPCC/LAist that recently, she has been eyeing a mayoral bid.

“I have been overwhelmed and humbled by people pushing for me to do this, and I will say that I am seriously considering it,” she said during the interview. “[Running for mayor] was not something I had thought about before — I was planning to run for reelection. I am evaluating the situation now,” Bass continued.

As theGrio previously reported, Bass, who previously served as chairwoman of the Congressional Black Caucus, was among a small group of candidates considered for the position of Joe Biden‘s running mate before he picked former Sen. Kamala Harris (D-Calif.). But Bass came under fire after past trips to Cuba and her assumed support of Fidel Castro became public.

Bass eventually walked back prior statements about Castro. In 2016, at the time of the controversial leader’s death, she referred to him as “Comandante en Jefe,” which translates to “commander in chief,” and is viewed as a positive term.

“I have talked to my colleagues in the House about that, and it’s certainly something that I would not say again,” she said.

Bass took trips to Cuba with a left-wing group, the Venceremos Brigade, during the 1970s. She attributed the decision to make the excursions to youthful naivete, telling the Hill, she was interested in “bridging the divide between our two countries.” 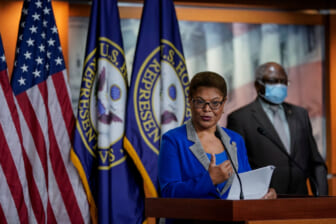 In a 2020 interview, Rep. Bass opened up about the family tragedy that connects her to Biden. As theGrio previously reported, when Bass appeared on The Carlos Watson Show, she spoke about the horrific car crash that killed her daughter and son-in-law.

Her daughter, Emilia Bass-Lechuga, and son-in-law, Michael Wright, passed away in 2006.

“The most difficult part of it was, and it was the same with (Biden), is when those accidents happened, both of us were in public life,” Bass said, “So you don’t have an opportunity to grieve privately.”

In 1972, Joe Biden lost his first wife and daughter in a car crash. He has frequently said the incident changed him forever. In 2015, his son Beau died from cancer.

Bass told Watson that the trauma of losing her beloved family members made her feel like, “nothing else can happen to me.”

theGrio’s DeMicia Inman and Biba Adams contributed to this report.