Bubba Wallace is winning, and he doesn’t care what you think

Wallace became the first Black racer to win the NASCAR Cup Series since 1963.

These days, Bubba Wallace is all about maintaining his peace. 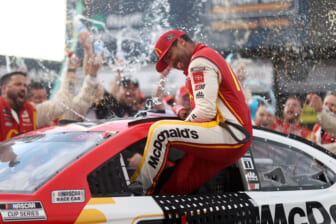 He carries the composure – and omnipresent smirk – of a man who just proved himself in his chosen sport on a grand scale: On Oct. 4, Wallace became the first Black driver to win the NASCAR Cup Series since 1963. He’s perfectly aware of the cabal of haters who’d look for any reason that a Black man couldn’t possibly achieve such accolades fair and square.

“I haven’t blocked it out this week because I know I’m a winner so I just laugh at it,” Wallace said during a Zoom interview with theGrio. “I love it. It’s so funny.”

Wallace’s win carries with it manifold significance –  not just because of its historical nature, but because the win happened at home: the 2021 Yellawood 500 took place at the Talladega Superspeedway, about a four-hour drive from Wallace’s home town of Mobile, Alabama. Little could take away from Wallace’s state of zen this week, but it helps that he took a nice break from social media.

“Being off social media has been a huge mental gain for me,” he said. “Staying off the main channels makes just a whirlwind of difference.”

Born William Darrell Wallace, Jr., he got into entry-level racing at age nine and started taking home wins before he was a teenager. He now competes in each of NASCAR’s three national series (Cup, Truck and Xfinity), winning his first Cup series driving the #23 Toyota Camry.

The late Wendell Scott, whose racing career was loosely portrayed in the 1977 film Greased Lightning starring Richard Pryor, was the last Black man to finish first in the series.

The same week he won the race, Wallace also received the National Series Driver Award for NASCAR’s Drive for Diversity, a development program NASCAR established in 2004 to attract women and ethnic minorities to a sport historically dominated by white males.

The award is an apt accolade for a man whose skin color removes any choice he had to serve as a racial and political firebrand for his sport.

Wallace has been outspoken about his feelings on George Floyd’s murder by former Minneapolis police officer Derek Chauvin. He also found himself at the eye of a controversy in 2020 when a noose was found in his garage, prompting an FBI hate-crime investigation that concluded the noose was a “garage pull” that had been around for years and not directed toward him and that the noose wasn’t for Wallace and was of no consequence to him.

Wallace is acutely aware of his role in a sport that not only doesn’t have many drivers who look like him, but is perhaps most popular in areas of the country with citizens that remain apathetic about or resentful toward racial progress. While acknowledging that it often gets “lost in translation” that he’s biracial, Wallace said he’s proud of what he, and his win, represent.

“I feel every minority in pit road or inside our four walls is in some way pumped up,” he said. “It’s a big win for myself, but it’s also a win for the African-American community. With everything going on in the last year and a half, it’s a ‘hell yeah’ moment. We need this.”

Wallace realizes that, programs aside, there’s still work to be done in NASCAR to make the sport more inclusive.

“Where do I see us in 10 years? Continuing to work because it’s a never-ending process,” he said. “Hopefully we’re in a much better place as a sport, but more importantly as a society, because that trickles down through any organization. The more positivity we have instilled in our minds and bodies will just carry over to our loved ones.”

Wallace hasn’t always maintained his current state of calm, as he demonstrated when he rage-quit a sim (simulated video game) race early this year.  But, outside of keeping away from social media, he deals with the pressures of his sport by playing golf whenever he gets the chance.

“I suck at it and I spend a lot of time with it and don’t get better, but I love playing by myself,” he says.

He’s also in a good place with his fiancé, Amanda Carter, to whom he got engaged earlier this year after five years of dating, and their dog.

At this very moment, the highs are certainly high. From the call he received from NBA legend Michael Jordan, co-owner of Wallace’s 23XI Racing team —“He was proud of me and the team. He said just a matter of time but we have five races left so he expects some more,” — to a day off for the Oct. 8 celebration of his 28th birthday.

But then it’s back to business, not resting on his laurels. There’s also the Netflix documentary series on Wallace that has been covering him since December 2020 that will immortalize everything, win or lose.

It’s scheduled for a 2022 release on the streaming platform.

“I’d like to get a win in the Xfinity Series because I’m winless there,” he said. “Nothing motivates me more than having zeores in the ‘win’ column. Well, we got one at the pinnacle level of our sport and that’s really good for me and my mental state.

“Moving forward, I’m excited to see how the momentum changes my career and season and how we will build off of it.”

The only thing Wallace talked about more than his Cup win is his hope to win next race, the Oct. 10 Bank of America ROVAL 400 race in Charlotte, North Carolina. Following his birthday, Wallace’s weekend will be about studying tape and doing what he needs to notch another win under his belt.

The whole affair reminds him of the 2013-2014 truck season, when it took him a while to get his first win before he won four races the following year. 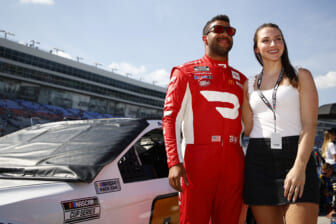 “If [I can keep up with] that same trend, I’m all for it,” he said. “I’m going to live out this win for a bit…I have until Sunday to potentially become a loser again, but right now I’m a winner.”