After a drama-filled season six, The Real Housewives of Potomac reunion will air on Bravo in just a few weeks, this time with a special guest host. 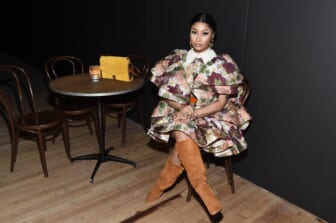 Earlier this year, Nicki Minaj expressed interest on social media in hosting the reunion for the latest season of the reality TV series. This was before the rapper was plagued by numerous controversies in the past few months.

Still, it seems Bravo went ahead with Minaj as both the official Bravo Instagram account and Andy Cohen‘s shared a photo of the rapper on set last week when the reunion wrapped. While many ‘Barbz’ are excited to see Minaj in action with the ladies, the decision is leaving many Real Housewives fans wondering why she was still invited after all of the issues she’s faced in the past few months.

One glaring aspect of Minaj’s many challenges this year is Jennifer Hough’s allegations regarding Minaj’s husband, Kenneth Petty. Hough claims both Petty and Minaj have been harassing her for years to “change her story.”

As theGrio extensively reported, in 1994 when she was 16, Hough reported to the police that Petty attempted to rape her at knifepoint. Petty pled guilty to attempted rape that year, serving four and a half years in prison. Hough alleged in her first televised interview on The Real that Minaj and Petty have been trying to get her to change her account of what happened.

Many fans are disappointed in Bravo for having Minaj on the show considering the seriousness of the crime Petty pled guilty to. One viewer wrote in a tweet, “So they really let Nicki Minaj come to that reunion AFTER we find out she’s been threatening and intimidating her husband’s rape victim…. And those black women probably took pics and everything with her a–. Do better @BravoTV#RHOP.”

As Hough’s allegations continued to unfold, Minaj made global headlines for a completely different reason last month. As theGrio previously covered, the rapper went on a Twitter rant in which she claimed she was still researching the COVID-19 vaccine and that a family friend of hers in Trinidad became “impotent” after receiving the shot.

This led to the rapper trending on Twitter for days, with the Biden administration and others making it clear that the CDC stated there is “currently no evidence that any vaccines, including COVID-19 vaccines, cause fertility problems in women or men.”

Even the health minister of Trinidad weighed in, saying they couldn’t confirm any such reaction to the vaccine.

The controversy divided Minaj’s fanbase, with some saying she should be more responsible considering her platform, and others, like MSNBC’s Joy Reid, who openly criticized her stance.

On her nightly show The ReidOut, she said, “For you to use your platform to encourage our community to not protect themselves and save their lives… As a fan, I am so sad that you did that.”

This led to Minaj responding via Twitter thread by slamming the host, asking her to “do better” and referring to her as “uncle Tomiana.”

Just this week, Minaj drew more backlash, this time for her defense of singer Jesy Nelson amid claims by many that she’s Blackfishing in her latest music video, “Boyz” featuring Minaj.

Rocking grills, a tan, and singing about “hood” guys, the ex-Little Mix member came almost immediately under fire following the release of the video.

Minaj and Nelson went on Instagram Live Monday, in which Minaj defended Nelson and slammed Leigh-Anne Pinnock, a Black member of Little Mix.

The latest controversy has made some fans wonder how she’ll handle the ladies of Potomac, as the topic of colorism often comes up on that particular Housewives franchise.

A viewer wrote in a tweet, “If she’s defending Jesy like this, I can’t imagine how she’s gonna treat the colorism topic at the Potomac reunion.”

The big question remaining is whether or not a fan like Minaj should host a Housewives reunion in the first place. Historically, Housewives reunions are usually hosted by executive producer Andy Cohen, the ladies’ “big boss” at Bravo.

According to Minaj, she was able to be fair while Cohen stepped out of the host chair for a few hours.

Although reports surfaced that Minaj was hardest on cast member Candiace Dillard Bassett, Minaj revealed in a recent Instagram Live that was hard on all the women.

She added, “If I go back without asking the real s– that my fans want to know, they’re going to look at me like I’m crazy.”

Cohen opened up about the reunion on his SiriusXM radio show, sharing, “I gave her my seat, I stepped aside, and she did her own version of a reunion with the housewives of Potomac, and let me tell you…I was like, ‘Wow, you said all the s— I could never get away with saying on several levels.'”

Fans will have to wait a few more weeks to see if Minaj’s turn on RHOP was worth turning a blind eye to her recent controversies. The Real Housewives of Potomac finale is set to air on Bravo on Oct. 31.