"Marriage, I don't think I can do that ever again," the actress, who filed for divorce from NBA husband Carmelo Anthony, said.

La La Anthony filed for divorce from NBA star Carmelo Anthony over the summer after 11 years of marriage. Now the actress says it’s unlikely she will ever marry again. 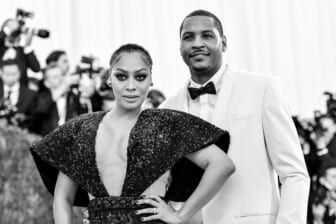 Anthony appeared on The Angie Martinez Show Monday and opened up about her single life as a mother of a 14-year-old son in high school.

“After you’ve been through what I’ve been through, which was public and really hard, you do start feeling like that and you see how people become jaded and, you know, ‘Maybe it’s not for me.’ But I always want to stay positive,” PEOPLE reports. “Marriage, I don’t think I can do that ever again. I mean, some amazing person would have to come. I don’t see that happening again,” she said.

“But I don’t know what God has in store for me,” continued Anthony. “I’m just living and taking care of my son, and whatever is supposed to be will be. I don’t try to put too much emphasis on it because then you start accepting anything because you’re like, ‘I don’t wanna be alone so I’m just gonna be with whoever, just have people around.’ I don’t have the time to just have random energy and people around.”

“I want it to be the right thing,” she said.

theGRIO previously reported that prior to the divorce filing, La La and Carmelo had been on and off for years. The couple called it quits in 2017 amid reports of infidelity. At the time, La La talked about the importance of standing on your own.

Despite their rocky relationship over the years, La La previously told PEOPLE that their son Kiyan’s well-being is the former couple’s main focus.

“That is my priority, that my son is healthy and happy,” La La said in 2017. “I will do whatever I can to ensure that, and my husband is the exact same way.”

La La who attended Howard University, says she hopes Kiyan will one day attend an HBCU.

“He’s just starting high school in the fall so we started helping him with picking his high school, which is really good because it prepares him to understand the process when it comes to picking a college for himself,” Anthony said.

“I would definitely tell him, and he knows what a great experience I had at Howard and understands the importance of HBCUs, and if that’s the right fit for him with what he wants to do, I would support it.”

As previously reported by theGRIO, Anthony has always had a tight bond with her only child. Last November, she told PEOPLE that she and Kiyan grew “closer than ever” during quarantine.

“My son and I have always been close, but I’ve gotten to spend even more time with him — getting even more connected to his world and what’s going on with him. So that’s really been great,” she said. 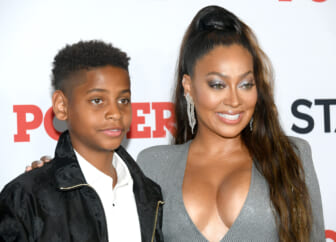 “And just wanting to be in tune with his experience during this time … we’re often just worried about how it’s affecting us and we don’t even check in with our kids and see how it’s affecting them. I mean, this is not normal yet, but it’s become our new normal, in a sense,” she continued.