The eldest Carter kid appears in "Date Night," which finds her superstar parents riding around New York City in a chauffeured Rolls Royce.

The 9-year-old eldest daughter of the Knowles-Carter clan made a scene-stealing appearance in a new ad featuring her parents, Beyoncé Knowles Carter and Shawn “Jay-Z” Carter, the spokespersons of the 2021 Tiffany “About Love” campaign.

However, a cut to behind-the-scenes footage shows that the vehicle is on a set with a green screen, as the precocious pre-teen pops up on camera and briefly hops in the car with her mom and dad.

In the clip, which is bonus footage from their primary ad for the legendary jeweler, the famous couple is in the back of the Rolls Royce enjoying champagne and even indulging in a slice of New York pizza. It’s a homage to the film Breakfast at Tiffany’s, which is the inspiration for the campaign.

In one scene, Beyoncé rests her head on her husband’s shoulder and, so appropriately, sings along to the classic Paul Anka hit, “Put Your Head on My Shoulder.”

Per Harper’s Bazaar, the couple is adorned in pieces from acclaimed Tiffany & Co. designer Jean Schlumberger. 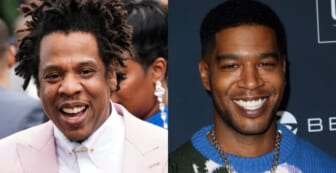 Jay-Z is wearing a famed brooch called Bird on a Rock, while his superstar bride wears an Alisa diamond ring and a pair of Ribbon Fan earrings. The pieces are all vintage by Schlumberger, who was known to have dressed First Lady Jackie Kennedy and actress Audrey Hepburn, the iconic Breakfast at Tiffany’s star.

As previously reported, the superstar pair appeared together in an ad in which Bey sings a version of “Moon River” as the musical backdrop.

Beyoncé and Jay-Z made major headlines when they announced their collaboration with Tiffany & Co. last month. At the time, Alexandre Arnault, Tiffany & Co. EVP of product and communications, referred to the couple as “the epitome of the modern love story.”

“As a brand that has always stood for love, strength, and self-expression, we could not think of a more iconic couple that better represents Tiffany’s values,” said Arnault. “We are honored to have the Carters as a part of the Tiffany family.”