Tyler Perry on his career: ‘My plan is to relinquish to a lot more directors and writers’

The media mogul spoke with The Hollywood Reporter about his lengthy career, filming during COVID-19, and more

In a recent interview with The Hollywood Reporter, media mogul Tyler Perry reflected on 15 years in Hollywood, and also opened up about the future of his entertainment empire.

A true trailblazer in the industry, Perry has broken records, barriers, and more in his extensive career. The mogul is the founder and CEO of Tyler Perry Studios, the first Black-owned studio, complete with a 330-acre lot in Atlanta. The creator has no plans to stop anytime soon. 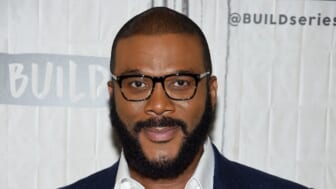 Also Read:
Tyler Perry addresses complaints about the wigs on his shows: ‘Stop asking me about some damn hair’

While it’s impressive that Perry is the sole writer and director for all of his shows, it has also become a point of criticism, as TV shows typically have writer’s rooms that provide jobs and diversity of creativity. In 2020, Perry revealed plans to finally establish writer’s rooms as well as hire new directors.

He opened up further about his plans to establish a new approach to his work.

“It’s going to be more of me overseeing, rather than doing the hands-on work,” he said. “For the past six weeks, I was in the mountains. I wrote 72 episodes of television…I start writing at 7 and don’t finish until 7 in the evening. I do that every day until it’s done. I love it. And I love directing for 12- or 15-hour days. But I realize there’s so much more that I could be doing if I were to hand some of the other stuff off — rather than doing it all myself.”

One would think that while writing hundreds of episodes of TV, a writer would encounter writer’s block every now and again. Perry, however, does not.

“I also don’t get writer’s block,” he said. “That comes from childhood. In my pain, in my abuse, I was able to disassociate and go into another world and see all these beautiful places in my mind. When I’m writing a script, I access that place and I can create those worlds pretty easily. I’m sure psychologists could tell you what that is … I don’t know.”

While Perry is one of the biggest names in Hollywood, yet his goal was never to “fit in” with the industry. “To have the last few years [of honors] at the Oscars, the Emmys and the star on the Walk of Fame, I was very moved and pleasantly surprised by it and thankful for it,” he explained. “But it’s never been my intention.” 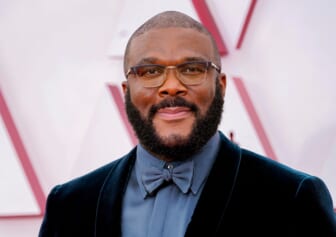 Perry was a trailblazer when it came to getting Hollywood back to work during the COVID-19 pandemic and still takes public health very seriously. To work in the office at Tyler Perry Studios, employees must be vaccinated. Almost 50 percent of his crew remain unvaccinated, which he called, “the scariest thing.”

“It’s shocking to me, the level of misinformation that people will lean toward rather than lean toward people who are educated on all of this,” he said. “It’s heartbreaking because I’m tired of seeing people die when there is a vaccine because they’re reading misinformation as truth.”

Towards the end of the interview, Perry opened up about his fascination with Norman Lear, the legendary producer behind series like Sanford and Son and The Jeffersons. “Norman is an incredible talent … all of the things he was able to do and how he was able to do them,” he gushed. “The brilliance of it is something that I’ve watched very closely.”

Check out the full interview with The Hollywood Reporter.