Actor Jonathan Majors, in his first time hosting Saturday Night Live, took some time to look back on his days before earning national acclaim as the lead in HBO’s Lovecraft Country or starring in the recently released Netflix western The Harder They Fall.

“It’s really wild to be here on this stage,” Majors said. “When they told me I was going to host SNL, I said ‘That’s impossible. For real, for real?’”

“I mean, it’s been a crazy journey,” the 32-year-old continued, describing being homeless and living in his car at age 17, earning what he could through two jobs at popular restaurants Red Lobster and Olive Garden.

“But you know what? I learned from that experience. You know what I learned? That Red Lobster and Olive Garden are owned by the same parent company, so you can work at both places with no problem,” Majors joked.

“Side note: It’s crazy how many people got their start at Red Lobster,” he added. “Both Nicki Minaj and Chris Rock worked there. Now, I don’t know what they’re putting in them Cheddar Bay biscuits, but it’s working.” 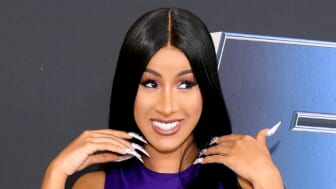 Also Read:
Cardi B discusses her ‘hair journey’ on Instagram

Jokes aside, Majors said he still recognizes the experience as a time in his life when he learned the value of a strong work ethic and sharp focus on achieving future goals.

“It taught me to work hard. If you trust the plan, great things can happen,” he said. “I’ve got a beautiful daughter. I’m going to be in the next Marvel Ant-Man movie—or, as the Black community likes to call it, ‘not Black Panther.’”

He said when the weight of hosting SNL finally sunk in, he remembered what his grandfather used to tell him about keeping perspective during life’s biggest moments.

“He’d say, ‘Grandson, everything’s big at first but you walk up on it, you face it and pretty soon it’s so small, you can put it in your pocket,’” Majors said, quipping: “Which incidentally is the tagline for the next Ant-Man movie!”

The Emmy winner began his monologue on Saturday by describing his experience filming “The Harder They Fall,” which Netflix dubbed a “new school Western” featuring an all-Black cast, as being fun despite the moments where he found himself comparing his attractiveness to that of co-star Idris Elba.

“It was fun filming that movie but if you ever want to feel bad about how you look, definitely spend two months right next to Idris Elba,” Majors said. “It humbles you.”

Joining Majors for the episode was musical guest Taylor Swift, who made her sixth total appearance on the popular NBC sketch comedy series.