"I just figured I would do what I could do, show up with some food and some water," said Jim Finch.

Kentucky Gov. Andy Beshear confirmed at a press conference Monday morning that at least 74 people across the state died following a string of deadly tornadoes in the area over the weekend, and noted that “there will be more.”

Jim Finch is being hailed a hero after he packed up a BBQ grill and some food and traveled to Mayfield, Kentucky, one of the hardest-hit areas in the state, to cook for people who were impacted by the deadly tornadoes that struck six states. 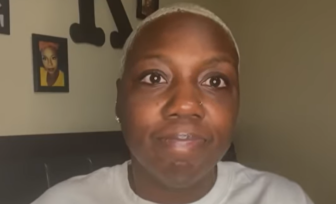 Also Read:
Kentucky tornado survivor details harrowing tale after being buried with others in debris for hours

A video of Finch, who was born in Paducah, Kentucky, was recorded by reporter Victor Ordoñez and posted on Twitter. The clip has reached more than 5.3 million views.

Ordoñez tweeted that Finch “drove half an hour with a grill and a truckload of food and parked right in the middle of Mayfield, Kentucky.”

“Jim wore a smile the whole morning, we laugh when I asked if he had a restaurant,” Ordoñez added. “He shook his head, ‘it just needed to be done,’ he said.”

“We’re trying to feed the people. We got hamburgers, chicken, I got sausage, eggs,” Finch said in a follow-up video. “Just real simple stuff you can have and not worry about making a mess, grab and go type of food.”

One Twitter user commented under the video, “This is what a true hero and a real patriot looks like! Thank you! What an awesome human being! “It just needed to be done”.

Another added, “Only a good man with a big heart will go out and help feed some hungry person. I’m pretty sure you personally were not affected, but care about the next person.”

A third wrote, “Every once in a while there is a story that gives you back a little of your faith in humanity. Thank you Jim Finch.”

The deadly tornadoes landed on Friday and continued over the weekend, destroying countless homes and businesses in Arkansas, Illinois, Kentucky, Missouri and Tennessee. Dozens have reportedly been killed, and six people died at an Amazon facility in Edwardsville, Illinois after part of the building collapsed following a tornado Friday.

Parts of Kentucky and Tennessee are without power, and search and rescue efforts continue in the hardest-hit areas in Kentucky, according to reports.

“This is likely to be one of the largest tornado outbreaks in our history,” President Joe Biden said on Saturday.

“They lost their homes. They lost their businesses. It’s a tragedy and we still don’t know how many lives were lost or the full extent of the damage,” he added. “But I want to emphasize what I told all the governors, the federal government will do everything, everything it can possibly do to help.” 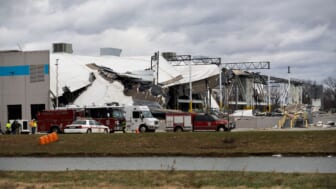 “This is one of those times when we aren’t Democrats or Republicans. Sounds like hyperbole, but it’s real. We’re all Americans. We stand together as the United States of America. And so, I say to all the victims, you’re in our prayers, and all those first responders, emergency personnel, and everyone helping their fellow Americans – this is the right thing to do at the right time, and we’re going to get through this.”