Knowles-Lawson's new talk show debuts today on Facebook, and its theme song features some near and dear voices.

Tina Knowles-Lawson, the proud mother of singers Beyoncé and Solange, has launched her own talk show on social media titled Talks With Mama Tina.

The show debuts Wednesday, Dec. 22, on Facebook Watch at 5 p.m. PST, and will feature Knowles-Lawson hosting candid conversations with some of her celebrity pals.

“I’m so excited to announce the launch of my new We The Culture and Facebook Watch show ‘Talks With Mama Tina’ where I’ve invited some of my favorite people over to my home to have a talk with me,” Knowles-Lawson captioned an Instagram video of the show’s trailer.

She added, “I loved filming this show and sitting down with so many amazing people because we got to have such honest heartfelt conversations and I got to make them my famous GUMBO!”

“I even got the pleasure of sitting down with some of the mothers of these talented superstars,” Knowles-Lawson shared. “I’m really proud of this show and all the people who helped make It happen! You won’t want to miss an episode!”

The theme song for Talks With Mama Tina features the voice of Beyoncé, her superstar daughter, as well as her grandchildren Blue Ivy, 9, and 4-year-old twins, Sir and Rumi. Knowles-Lawson thanked her family in a post for lending their talents to her new project.

“Thank you to my baby @beyonce and my beautiful grandbabies for making this special theme song for the show,” the proud grandmother continued. “Are you guys ready to watch?” 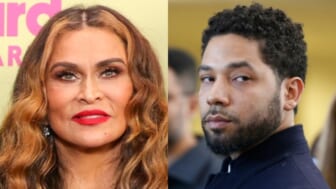 Also Read:
Tina Knowles-Lawson questions whether Smollett will be treated the same as Amy Cooper

Most recently, Blue Ivy won the Best Voiceover category at the 2021 Voice Arts Awards for the audiobook narration for the children’s book, Hair Love.

In an Instagram post celebrating her granddaughter’s win, Knowles-Lawson wrote, “Congrats my Blue You killed this!! It’s only the beginning ! You are so talented ! Grandma is beyond proud!!!❤️❤️.” The message also noted that Hair Love is  a children’s book that “follows the ups and downs of a dad taking care of his young daughter’s hair for the first time.”

After a successful Kickstarter campaign, the book’s author, Matthew A. Cherry, adapted the story into a short film that won an Oscar in 2019.

“I am asking everyone that follows me to re-post this video and to help me get the word out about these interviews,“ wrote Knowles-Lawson in the post of her talk show’s trailer. “So you can enjoy watching these heart-to-heart talks and sometimes they show a more serious side of my guest; we talk about their families and how they grew up and it is a very beautiful way to celebrate the talent of all of these super-talented people.”