Jeannie Mai reveals name of her and Jeezy’s first child

Mai held back one detail about the baby born earlier this month — Monaco Mai Jenkin's gender will be revealed at a later date.

The Real co-host Jeannie Mai has announced the name of her first child with husband Jeezy.

She shared the baby’s name during a nursery tour posted early today on her YouTube channel. But on Wednesday, her co-hosts on The Real made the revelation to fans.

“Today is an extra exciting day because, guess what … we have a Baby J update,” co-host Adrienne Bailon said, according to People.

Bailon pulls out an envelope and reads, “Three years ago, Jeezy and Jeannie were talking on a bridge in France, talking about what it meant to do life together. Here they decided to grow and raise a family together. Hence, they named their child after the city that changed their lives forever: Monaco Mai Jenkins.”

In her YouTube video, the 42-year-old new mom was still expecting “Baby J” and gave viewers a tour of the neutral colored nursery, which has a travel theme. She eventually arrives at the baby’s crib, above which is the baby’s name: Monaco.

“I thought Baby J’s name should be a J name because obviously Jeannie and Jeezy, makes sense, but that wasn’t the name that came to us,” Mai explains. “What really came to us was how Baby J came to fruition for us when we were dating.”

However, she said that she and Jeezy traveled to Monaco, France, and the exclusive destination was where she and the four-time Grammy-nominated rapper declared their desires for the future and “established what was going on for us.”

At another point in the video, Mai sits in a recliner with a globe next to her and says she looks forward to sitting there and showing the baby all the places that she and Jeezy plan to take their child. 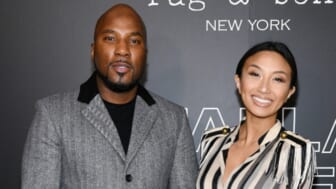 “That’s really the theme of the nursery: what Monaco is about. Family, moments, traveling, discussions, important key points in my life and Jeezy’s life that brought Monaco here,” she adds.

In revealing the name, Mai held back one detail about the baby who was born earlier this month — its gender —which will be revealed at a later date.

As previously reported, the couple had suffered a miscarriage and planned to undergo IVF therapy to conceive before discovering that they were expecting again a week before their wedding. In September, Mai told Women’s Health, “It was the most beautiful sign that anything’s possible, that you’re not in control, and God has a plan.”