The two leads of this thriller spoke with theGrio about working together and how children can go from being abused to being the abuser.

The Black man has been subjected to many inequities and harshness stemming from prejudice and discrimination. Oftentimes, these men turn hard, cold, and jaded, and want to steer their sons away from the pitfalls that they befell them, or at least, teach them to navigate in a cold world.

Unfortunately, the trauma of societal abuse can cause men to inadvertently project it onto their offspring. The film Chained illustrates how that continues to spin across generations. 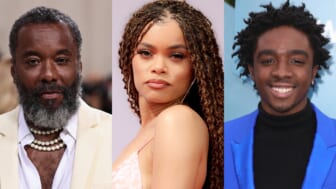 The Canadian-based thriller stars young Marlon Kazadi and Adrian Holmes as Taylor and Pete, a son and father who illustrate that cycle. Pete, a local police officer thinks that he’s demonstrating “tough love” on Taylor, a high schooler who engages in gardening to stay spiritually close with his deceased mom, but in fact, Pete is crossing the line.

That manifests itself when Taylor discovers a criminal named Jim, played by Aleks Paunovic, chained inside of an abandoned factory. Although Taylor begins to make friends with Jim, who has hidden stolen money, things take a gradual turn.

Taylor wants to get the money to leave home and escape Pete’s anger. However, he begins to torture Jim, thus personifying how trauma can be transferable.

Originally shot back in 2019, Chained received much acclaim when it premiered at the Vancouver International Film Festival in 2020. After being acquired by Freestyle Digital Media, it made its U.S. debut last month distributed by Allen Media Group/Entertainment Studios.

TheGrio spoke with Holmes and Kazadi about the film, acting together and the complexities of their characters. 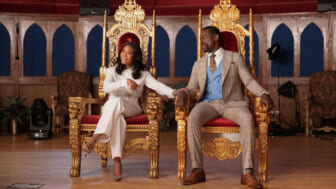 Kazadi, 17, has had great success with supporting roles in projects like Ghostbusters: Afterlife, Riverdale, and Child’s Play. However, for Chained, at just 14 at the time, he found himself leading a feature film.

“I was definitely nervous and worried because since it was my first lead role. I was worried how I was going to pull it off or not,” Kazadi told theGrio. “And then just as soon as I started working, I really just forgot about that, and I only focused on doing a good job and also just making the whole filming process for everybody else easier. Because since the whole movie is about Taylor’s character, you have to be on top-notch performance every single time to make it easier for everybody else.”

The chemistry between Kazadi and Holmes was the most crucial aspect of the film’s success. With only 15 days to shoot the film, both had to find it fast, and they did.

“We only had like a couple of days to meet each other and talk to each other,” Kazadi said of working with Holmes. “Thanks for his professionalism, it really helped for me and him to create such a strong bond [and] chemistry. That was really helpful, especially during those tense moments.“

“He’s dealt with a lot of crooked cops and he knows how hard it is for a Black teenager, how it is out there and how they’re treated by cops,” Holmes told theGrio. “So there’s there’s fear, there’s a lot of fear in him being a parent.”

Holmes went on to say that Pete’s ‘toxic masculinity,’ while ultimately harmful for Taylor, comes from a place of care and protection.

“He wants to do his very best to raise his son well. And in doing so, he can cross the line a little bit and just the end of what’s considered appropriate and not appropriate, and how to better parent your child. In his mind, he doesn’t really see that he’s doing anything wrong. He just feels that this is, it’s tough love.” 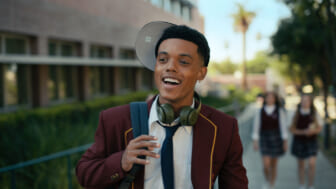 The audience gets to see how the father/son relationship that drives Taylor to project that dynamic onto Jim. In Chained‘s opening scene, Pete raises a lit cigarette to Taylor’s face, to show him how police would treat a Black teen under arrest. Later, when Taylor is interrogating Jim, he repeats his father’s actions by threatening him with a hot pipe held to his face.

“It shows that when you’re a parent, you have to be very careful what you do and what you say because it does have it has its effect that makes an impact on your children,” Holmes said.

“And you may think that it doesn’t, but they will go out and they will copy what you do and they will take the lessons that you that you teach them whether good or bad, and they will use them out in the world with their friends and in their experiences.”

Holmes said that it’s important for the viewer to walk away understanding how crucial it is to give your children a voice.

“I think that it’s important to listen to your kids and really give them the time, you know? Let them be heard, you know? You know, don’t just brush them off. They’re human beings.”