Ye asks for God to ‘bring family back together’ as Kim Kardashian, kids appear in Vogue

At this point, it may take a miracle for Ye to repair his relationship with his estranged wife Kim Kardashian. On Wednesday, the determined dad and husband called on a higher power to step in and save the couple’s marriage.

“GOD PLEASE BRING OUR FAMILY BACK TOGETHER,” the rapper formerly known as Kanye West wrote in all caps under a photo collage with Kardashian and their children on Instagram.

The photos show the adorable smiling kids piling onto a mini-ATV and a pint-sized Ferrari as they play outside and bond with their famous mom. One photo shows the Skims creator kissing 2-year-old Psalm. 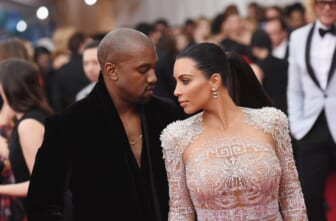 The children’s father is notably absent from the photos, which Vogue said were shot outside Kardashian’s Hidden Hills, Calif. home during the first week of January.

In the cover story, the 41-year-old says it’s “okay to choose you.”

The story refers to Ye as Kim’s “soon-to-be ex-husband,” and details the tumultuous events that led up to Kardashian officially filing for divorce about a year ago after seven years of marriage.

“For so long, I did what made other people happy,” Kardashian told the magazine. “And I think in the last two years I decided, I’m going to make myself happy. And that feels really good.”

Kardashian filed additional paperwork to be declared a “legally single” woman in December. But Ye has spent the last few months lashing out in public in apparent attempts to rekindle the couple’s romantic flame.

Last week he criticized Kardashian for allowing their eldest daughter North, 8, to post on a joint TikTok account she shares with her mother.

“SINCE THIS IS MY FIRST DIVORCE I NEED TO KNOW WHAT I SHOULD DO ABOUT MY DAUGHTER BEING PUT ON TIK TOK AGAINST MY WILL,” West wrote in a previous Instagram post that has since been deleted.