Prince William expresses sorrow for slavery, but offers no apology, during Jamaica visit

He echoed the words of his father, the Prince of Wales, who described the slave trade as an “appalling atrocity” during a visit to Barbados last year.

LONDON (AP) — Prince William has expressed his “profound sorrow” for slavery during a visit to Jamaica, though he stopped short of offering the apology demanded by protesters who are also seeking reparations for Britain’s role in the slave trade.

William, second in line to the throne, made the comments while addressing a dinner in Kingston, Jamaica’s capital. He echoed the words of his father, the Prince of Wales, who described the slave trade as an “appalling atrocity” during a visit to Barbados last year, when that Caribbean nation severed its ties to the British crown and became a republic.

“I want to express my profound sorrow,’’ William said. “Slavery was abhorrent, and it should never have happened.’’

The prince and his wife, the Duchess of Cambridge, are on a weeklong trip to Belize, Jamaica and the Bahamas designed to strengthen Britain’s ties with Commonwealth nations as Queen Elizabeth II marks 70 years on the throne. Jamaican Prime Minister Andrew Holness said earlier Wednesday that his country intends to sever its ties to the monarchy and become fully independent.

The queen, William’s grandmother, remains the head of state for Jamaica and 13 other countries that were once British colonies.

William’s comments underscore the sensitivity of the trip in a country where Britain’s legacy as Jamaica’s colonial ruler during the era of enslaved African labor is still controversial. The prince said anniversaries such as the International Day of Remembrance of the Victims of Slavery and the Transatlantic Slave Trade, which will be marked on Friday, provide a moment for “reflection.” 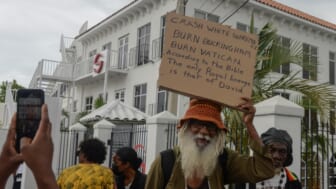 Protesters in Jamaica have spoken out against the trip, demonstrating outside the British High Commission on Tuesday with raised fists and wearing T-shirts emblazoned with a pair of shackled Black wrists surrounded by the phrases “Seh Yuh Sorry!” and “Apologize now!”

“Kings, Queens and Princesses and Princes belong in fairy tales, NOT in Jamaica!” read one poster held aloft by a young girl.