After a two-year COVID-induced hiatus, the return of the White House Correspondents’ Association Dinner in Washington DC Saturday made news, but perhaps the only event that could rival it was a subsequent reception curated to amplify Black culture and the excellence of Black media. 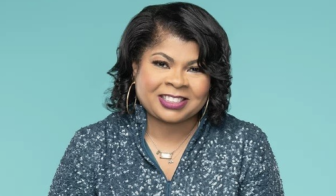 With centuries of artifacts of Black struggle one floor below and exhibits of Black excellence and innovation one floor above, “A Seat at the Table” embodied the fulfillment of authentic realization of ownership over truth and amplifying the voices for the unheard.

April Ryan has done that for 25 years while covering the White House where she boldly asks questions for which the world needs answers to about the economy, health and climate and that Black America in particular needs information and action such as voter suppression, policing, education and more.

Allen Media Group, Proctor & Gamble, Nationwide, the Coca-Cola Company, the Ford Motor Company, and the NAACP partnered to sponsor the night to celebrate Ryan’s body of work and to celebrate Black media.

And celebrate they did! Black culture amplified? Check. Music that makes you move? Oh, yeah! Food to delight the palate? Absolutely! Black joy? In heaps!

The lobby of the NMAAHC held more than 250 attendees dressed to the nines in glamorous cocktail attire. Every shade of Black was accounted for. Guests sitting on plush blue velvet couches dined on scrumptious food presented in regal fashion.

Attendees were treated to sushi a la carte, chicken and waffles served on miniature cast iron skillets, with a wellspring of champagne and specialty rum punch. All the while, DJ Brian Henry was presiding over the music, ranging from Michael Jackson, the Bee Gees, and Stanley Turrentine.

Among the crowd were Black media luminaries, like The New York Times’ Nikole Hannah-Jones, who is the force behind The 1619 Project, Emmy-winning broadcaster Ed Gordon and CBS anchor Gayle King, to name a few. Star-studded names like Vivica A. Fox and New Edition’s Ronnie DeVoe mingled among the guest, and Chris Tucker was the evening’s host.

After Byron Allen, CEO of Allen Media Group, the parent company of theGrio, honored the work of Ryan, DJ D-Nice commenced bringing the attendees to the dance floor with his signature Club Quarantine performance. It warmed the crowd up for a special six-song performance by Mary J. Blige. The Queen of Hip-Hop Soul performed classics like “Real Love,” “Love No Limit,” “Just Fine,” and “Family Affair.”

Blige’s performance was a climax to a night of memorable moments. Whether it was Tucker clowning with Civil Rights attorney Ben Crump, Hannah-Jones lip-syncing nearly every lyric of Blige’s songs, DeVoe breaking out his BBD choreography after D-Nice played “Poison,” or the massive electric slide that D-Nice prompted with Maze’s “Before I Let Go,” A Seat at the Table was a night that will be remembered for years to come.