Authorities have admitted that even the Nigerian police are sometimes overwhelmed during violent attacks.

A Nigerian governor has ordered the issuing of licenses so citizens can carry guns to defend themselves against armed groups, a first among the measures drawn up to defeat gunmen blamed for the deaths of thousands in the West African country’s troubled northern region.

Zamfara state Gov. Bello Matawalle announced Sunday through the state commissioner for information that the directive to issue gun licenses follows “the recent escalating attacks, kidnapping and the criminal levies being enforced on our innocent communities.”

Armed groups known locally as bandits have targeted remote communities in Nigeria’s northwest and central regions. Kidnappings for ransom took place last year in Zamfara, one of the worst-hit states in the armed violence.

Gun permits for self-defense are very rare in Nigeria, and Zamfara could be the first state to offer mass approvals. It was not yet clear how arming citizens would help prevent the attacks; authorities have admitted that even the Nigerian police are sometimes overwhelmed during violent attacks. 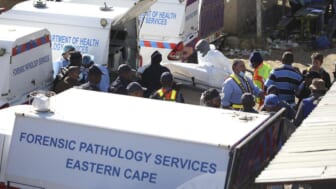 Also Read:
At least 20 dead in South African club; cause not yet known 

Nigeria also is fighting a decade-long war against Islamist extremist rebels in the northeast region.

“This act of terrorism has been a source of worry and concern to the people and government of the state,” Ibrahim Dosara, the Zamfara information commissioner, said in a statement. He said the government has arranged for 500 licenses to be distributed to those “who qualify and are wishing to obtain such guns to defend themselves.”

Past measures, including telecommunications blackouts, blocks of millions of unregistered phone lines and a series of curfews, have not achieved the long-sought peace.

As gun permits are rolled out in Zamfara, the local information commissioner also urged residents to report informants working for the armed groups. Analysts have told The Associated Press that such informants are usually recruited by the attackers and acquiesce because of economic hardship and fear for their safety.

The state government has ordered the recruitment of 200 additional local guards in each of Zamfara’s 19 emirates “to increase manpower and strengthen its force and capacity to deal with the bandits,” Dosara, the information commissioner, said.

Markets and gas stations in some volatile areas were also closed. In addition, motorcycles were banned; groups of bandits numbering in the hundreds often attack communities while riding motorcycles.

“Government is hereby directing the military, police, civil defense and other security agencies to mobilize their operatives and take (the) fight to the enclaves of the criminals with immediate effect,” the commissioner added.