TheGrio highlights the most unforgettable moments from the "BET Awards 2022" on Sunday.

The BET Awards is one of the most anticipated live events each year. This annual celebration of the best of Black music and entertainment always has a litany of big moments and surprises, and the “BET Awards 2022” was no different.

From host Taraji P. Henson’s Egyptian entrance to Janelle Monae telling the Supreme Court, “f–k you,” to Babyface’s duet with Ella Mai, and Billy Porter bringing the ballroom to the stage, Sunday night’s award show had quite a few unforgettable moments. TheGrio is highlighting five of them: 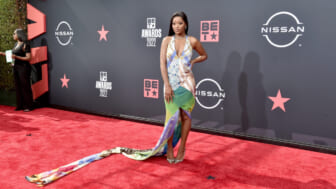 Also Read:
Who brought their Sunday best to the 2022 BET Awards red carpet?

Lizzo Opens With “About Damn Time”

The show started in a big, shining way. Lizzo emerged in an all-gold sequined outfit, playing a flute with a gold disco ball and giant ticking clock with her face superimposed on it projected in the background. The three-time Grammy winner then kicked off the festivities with “About Damn Time,” her dancefloor anthem and lead single from her forthcoming album, “Special.” She was joined by an all-female band and male and female background dancers, all covered in gold. It made for a great way to start the show.

The new gospel music phenomenon, Maverick City Music, took the BET Awards stage with gospel music legend Kirk Franklin. Together, the ensemble, dressed in Black “Mav City” T-shirts, performed one of its collaborations with Franklin, “Kingdom,” as Franklin — dressed in all-red —played the piano mid-stage. With the stage filled with smoke, the performance, led by Maverick City soloist, Naomi Raine, was grand and inspiring. It led to Franklin’s “Melodies From Heaven” and the band infused Lil Kim’s “Crush on You” sample for good measure.

The artistic ascension of Chlöe continued on the BET Awards stage. The older half of the Chlöe X Halle duo performed two of her latest solo singles. Dressed in black leather, she started with her newest offering, “Surprise,” and by giving a lap dance to a man in a blindfold. The climax of the medley came with her single, “Treat Me,” during which a group of background flanked her, solidifying Chlöe’s position as one of today’s most prominent R&B sex symbols. 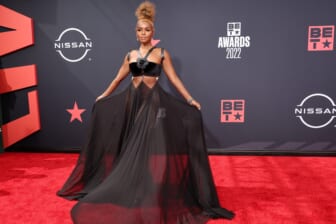 Both Jack Harlow and Latto were among the most anticipated performers of the evening. Little did the audience know that both performances had a big surprise. Harlow started his performance with “Poison,” which featured Lil Wayne. But his version of “First Class” brought people to their feet when Brandy came out to do her freestyle over the hit single. She first released the rap online after Harlow said he didn’t know she and Ray J were siblings.

Latto, who won the first award of her career that evening, brought her smash hit, “Energy,” to the BET Awards stage. She performed a remix of the song featuring Champagne and a cameo by Old Dirty Bastard’s son Young Dirty Bastard. He covered his dad’s intro to Mariah Carey’s “Fantasy” remix, from which “Energy” is sampled. A silhouette of Carey was illuminated on stage before the diva came on stage to perform a verse of “Fantasy” before the audience.

The Lifetime Achievement Award is the portion of the show that many viewers most look forward to each year, including this year. Recipient Sean “Diddy” Combs received a career retrospective that captured various eras of his music. Jodeci and Mary J. Blige performed hits he produced for them, starting with his Uptown Records days.

Then Combs came on stage to perform a medley of hits from the Bad Boy Records catalog. The Lox and Lil Kim joined him for their smash, “All About the Benjamins,” while Busta Rhymes came out to perform “Pass the Courvoisier.” The medley ended on a poignant note as Combs’ former girlfriend and mother of his three kids — the late model Kim Porter — was projected on stage during his 1997 single, “I’ll Be Missing You,” with Faith Evans.