Daniel Kaluuya will not appear in ‘Black Panther’ sequel

"Black Panther: Wakanda Forever" is scheduled for release on Nov. 11.

Daniel Kaluuya won’t be returning for the sequel to the Marvel blockbuster, “Black Panther.” The Academy Award winner had to bow out of “Black Panther: Wakanda Forever” because of a scheduling conflict with another film, according to Deadline.

Kaluuya is starring in Jordan Peele’s latest horror film, “NOPE,” alongside Keke Palmer and Steven Yeun. Conflicts with the shooting schedule could not be resolved, leaving him unavailable to reprise his role as W’Kabi in “Black Panther: Wakanda Forever.” Peele’s “NOPE” is set to release on July 22 in theaters.

W’Kabi led security for Wakanda’s Border Tribe and was the friend and confidant to T’Challa, the Black Panther and king of Wakanda. T’Challa was portrayed by the late Chadwick Boseman, who died of colon cancer in 2019.

Despite Kaluuya’s departure, many cast members from the original film will return for the sequel. This includes fellow Academy Award winner, Lupita Nyong’o, as well as Angela Bassett, Danai Gurira, Letitia Wright and Winston Duke. Actress Dominique Thorne, who co-starred with Kaluuya in “Judas and the Black Messiah,” is one of the new cast members.

Filmmaker Ryan Coogler is also returning as director of the sequel.

Following Boseman’s death, Marvel decided not to recast T’Challa for the sequel. As a result, Black Panther: Wakanda Forever will revolve around his absence and continue exploring the world of Wakanda. Further plot details have yet to be disclosed. 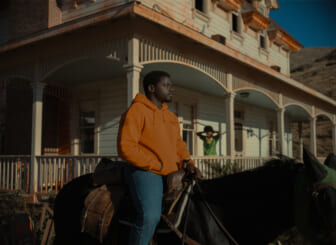 Production on the sequel had been delayed several times because of the COVID-19 pandemic, and Wright was the subject of backlash because of her views about the COVID-19 vaccine. Filming concluded in March and is scheduled to be released on Nov. 11.

“Black Panther” was a critical and commercial success upon its 2018 release. It took less than a month for the film to gross more than $1 billion at the global box office, according to Variety. This week, Boseman received a posthumous Emmy nomination for reprising his role of T’Challa for the Disney+ animated series, “Marvel’s What If…”

Matthew Allen contributed to this article.