Jordan Peele reflects on how ‘Nope’ is ‘not supposed to exist’

The writer and director also describes his responsibility as a filmmaker and how his latest feature is a sequel to "Get Out."

After months of anticipation, audiences will finally discover what the long-awaited third feature film from Jordan Peele is all about, and chances are none of their guesses about “Nope” will come close to the breathtaking truth of this sci-fi/horror flick that breaks boundaries at every turn.

Starring Daniel Kaluuya and Keke Palmer, the film is nothing if not a spectacle, and it’s easily the biggest and boldest swing we’ve ever witnessed the acclaimed writer and director take.

Cinematically, it’s a feat that Peele pulls off as only he could – blurring the lines between horror, suspense, comedy, and sci-fi – in a way we’ve never seen, all while planting seeds whose meanings people will debate for years to come.

The sprawling landscape captured by pristine cinematography makes this film as beautiful to watch as it is terrifying, and the near-perfect performances from Kaluuya and Palmer make it as mesmerizing as it is perplexing.

Sparse details in the marketing of this movie were clearly intentional, and the uncertainty audiences have about what the project is about is part of the excitement of this larger-than-life summer blockbuster that should remind us all what it means to be thoroughly entertained.

While “Nope” offers lots to ponder on everything from the clouds in the sky to the reality of UFOs to the never-ending quest for fame and fortune, its more subtle points are the ones that stick to your ribs, questions about Blackness in Hollywood, our erasure as a culture and as an influence in spaces and genres we’ve been a part of from the start.

In “Get Out,” Peele’s first full-length offering, which also starred Kaluuya, the commentary on race was overt and obvious from start to finish, but “Nope” is equally steeped in issues of race, even if they’re boiling beneath the surface. 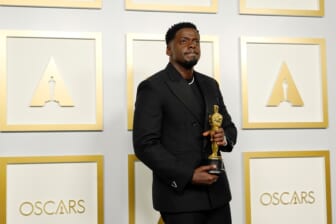 When theGrio sat down with Peele after an early screening of the film, the notion of erasure was fresh on our minds, and it turns out, it was one of the themes he grappled with while creating it.

“Let’s talk about the erasure of the Black cowboy and the sort of myth – of the Hollywood myth of what the Wild West is,” he says. “It was very important because as I choose what to make, I’m thinking a lot about what my responsibilities are to myself and to my audience. And it’s very hard to make a film where I have Black leads, I have a Black perspective and a big summer blockbuster, and not think about and not have interwoven the fact that you don’t have this happen into the movie.”

To that end, “Nope” is a continuation of the conversations he started with that first award-winning film, and its mere existence is a testament to the power of art to change the long-accepted status quo.

“It was just impossible for me to separate the fact that this is, in a way, a sequel to the first film, which was precipitated in the erasure of a Black man,” adds Peele. “I’m so fortunate to be in a position where I can write a story that – it’s not supposed to exist. And that’s always what I’m trying to do, is write something that they’re not supposed to, that they wouldn’t have let someone do.”

It’s clear that Peele understands his job as a filmmaker is to entertain his audiences, but what continues to set him apart from other creatives is his knack for doing so while breaking boundaries that have existed since the beginning of cinema.

Much like the characters in “Nope,” Peele and his projects come with a certain expectation of excellence. Even after just two feature films under his belt, the bar for “Nope” is automatically high and expected to carry on the legacy he’s created. Fortunately, Peele is keenly aware of the challenge and more than up to the task.

“The characters have this, a burden of excellence and a burden to excel and fulfill the legacy and to prevent the type of erasure that their family and their father had overcome,” says Peele. “This movie came from me, I think, grappling with my responsibility as a filmmaker.”

That point is highlighted in the film’s fictional plot line but also in its real-life positioning as the biggest blockbuster of the summer. 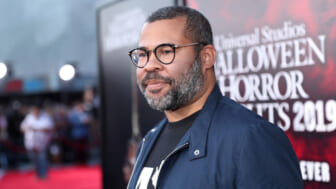 “Just plain and simply, that’s what we want,” he continues. “We just want to make the best damn movie. I love that there’s a big conversation after my films. The attempt is always to entertain.”

“Nope” is in theaters everywhere July 22.