50 Cent to host podcast on El Chapo for Lionsgate Sound

Curtis “50 Cent” Jackson is set to host and produce a podcast about the infamous former Mexican drug lord El Chapo. The podcast will be among the first audio programs for Lionsgate Studio’s new podcast division, Lionsgate Sound.

The project currently has the working title, “Cuate/twin: The Downfall of El Chapo,” according to Variety. It will be included with a slate of new podcasts for Lionsgate Sound, a full-service podcast production company.

Craig Piligian, producer and leader of Pilgrim Media Group, a Lionsgate company, will operate the day-to-day operations of Lionsgate Sound as well as have minority ownership.

“We’re thrilled to partner with Curtis ‘50 Cent’ Jackson and the other talented creators behind our upcoming shows,” said Piligian to Variety. “With our strong lineup out of the gate, we are well-positioned to reach the next generation of consumers.”

“Cuate/twin: The Downfall of El Chapo” will be exclusively distributed by the iHeartPodcast Network. The podcast is also being created in collaboration with Jackson’s own podcast company, G-Unit Audio.

An FBI-themed program called “A Nation for Thieves,” an interview show called “Playing Dead,” a show that chronicles near-death experiences called “Died and Survived,” and a true crime thriller called “The Lives and Deaths of Barry and Honey Sherman,” will be amongst the inaugural slate of podcasts for Lionsgate Sound. 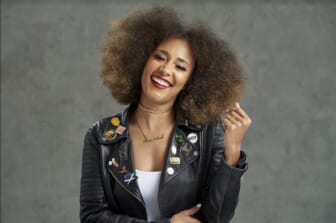 Also Read:
Amanda Seales talks Roe v. Wade and her return to the road on ‘Acting Up’

“We look forward to entering the rapidly expanding podcast market as a great source of exciting new properties as well as an opportunity to feed the growing demand for audio content with our films, television series, Starz original programming, and library titles,” said Joe Drake, chair of Lionsgate’s Motion Picture Group, and Kevin Beggs, chair of the Lionsgate Television Group in statement obtained by Variety.

Drake and Beggs continued, “This initiative demonstrates Lionsgate’s 360-degree approach to content, creating an opportunity for us to continue onscreen stories and make companion podcasts to serve fans of our IP while scaling the audience base for new projects.”