Kenan Thompson to receive star on Hollywood Walk of Fame

The "SNL" star will receive his star on Aug. 11, and it will be next to the man who gave him his job, Lorne Michaels.

Kenan Thompson, longtime “Saturday Night Live” alum will receive a star on the Hollywood Walk of Fame in the coming days.

Walk of Fame announced this week that Thompson will be the 2,728th recipient of a Hollywood star, celebrating the career and work of elite entertainers and artists. The ceremony will take place on Aug. 11 at 11:30 a.m. PST at the site of the star, 6627 Hollywood Boulevard.

Lupita Sanchez Cornejo, chairman of the Hollywood Chamber of Commerce, will be emcee for the occasion. Joining her will be special guests actor Josh Server, comedian/actor J.B. Smoove and Thompson’s former “SNL” castmate and comedienne, Leslie Jones.

Thompson is the longest-tenured cast member in “SNL” history with 19 seasons under his belt. During that time, he’s made audiences laugh with memorable reoccurring sketches such as “Black Jeopardy,” and “What’s Up with That.” He also is well known for his humorous impressions of figures such as Rev. Al Sharpton, Charles Barkley, Steve Harvey and David Ortiz. 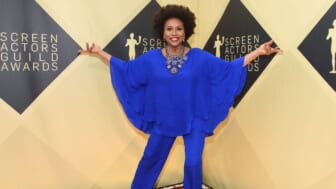 Prior to joining “SNL” in 2003 where he earned four Emmy Award nominations, Thompson has been entertaining audiences since childhood. He became a child star on Nickelodeon’s teenage sketch comedy series, “All That,” in the 1990s, as well as the network’s hit sitcom “Kenan and Kel” with “All That” co-star, Kel Mitchell.

“Kenan Thompson is the voice of a generation” stated Ana Martinez, producer of the Hollywood Walk of Fame. “From Kenan and Kel to Saturday Night Live, Kenan has been making folks laugh for nearly 30 years.”

As a “celebration for Thompson’s upcoming 20th anniversary” on the NBC sketch comedy series, Martinez said that “it would be fitting to place Kenan’s star next to the star of the man who gave him his job, Lorne Michaels.”