Hulu's "Everything's Trash," "I Love That For You" on Showtime and others top our quick list of must-see TV comedies now airing.

Whether it’s the latest project from the hilarious mind of Phoebe Robinson or another star turn from Jenifer Lewis in Showtime’s “I Love That For You,” there is plenty to offer these days when it comes to television comedies. If you’re looking for a good laugh, theGrio has got you covered, detailing the funniest shows on TV right now.

Phoebe Robinson fans are in for a treat with “Everything’s Trash.” The new series from the “2 Dope Queens” host and successful comedienne follows the fictional version of herself. Enter Phoebe Hill, a broke podcaster surviving her 30s in Brooklyn, New York. Through portraying her as she juggles her single dating life, her political candidate of a brother or her popular podcast, the series offers many insights into young millennial living in New York City and, of course, many laughs.

“Life is hard, and you do the best you can,” her character states on her podcast. “And I think I’m OK representing that.” Robinson echoed these sentiments during a chat with “The View” cohosts. “One of the things I wanted to do with this show is, you know — I was an early 30-something podcaster, broke in the city, eating dollar pizza — adulthood is hard, and it’s kinda trashy, but we’re all trying to figure it out,” she told the cohosts.

“Everything’s Trash” is available to stream on Hulu.

I Love That for You

If you haven’t caught “I Love That For You” yet, now is the time. The entire first season of the hilarious series from Vanessa Bayer is on Showtime and it features a performance from Jenifer Lewis that critics have called “powerfully funny.” Bayer’s character, Joanna Gold, is a leukemia survivor whose big dream is to host SVN, a TV home shopping network. Eventually getting a slot on the channel, Gold is rushed into the fast-paced world of SVN and is quickly introduced to Lewis’ Patty, the big boss of the company.

Lewis opened up to Salon earlier this year, detailing her character and what drew her to playing the woman in charge.

“Patricia puts on that mask, and she walks in it,” she told the outlet. “She moves her employees around like a chess game. Sometimes she’ll purposefully hurt their feelings so they can get up and keep their job, make that money. Patricia’s all about money, but as the season goes on, you’ll see all of the levels of Patricia. She’s a very interesting woman, and I am so enjoying playing her.”

If you’re itching for some Maya Rudolph, “Loot” may be the perfect show for you. The Apple TV+ series premiered in June on the streamer and instantly received positive reviews from critics.

Already picked up for Season 2, the show follows Rudolph’s character, Molly Novak, a billionaire who after 20 years finds herself completely betrayed by her husband. In her lowest period, Novak makes the discovery that she has a charity foundation. Along with the people who work for her and the charity, Novak embarks on a healing journey as she deals with her past and makes way for a new future.

“I’ve never been asked to be a billionaire before, I’ll be honest,” Rudolph told theGrio. “So, that was exciting of like, what does that mean? The sky is the limit in terms of the visual of the show … combined with the idea of examining a life where you think your life is going one way and midlife, everything falls apart.” 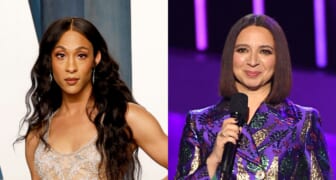 The first season of “Loot” is currently available on Apple TV+.

Another must-watch series is Showtime’s “Flatbush Misdemeanors” from comedians Dan Perlman and Kevin Iso, who play fictionalized versions of themselves. The show, originally a web series dating to 2017, follows the two as they live their lives in the Flatbush section of Brooklyn, New York. The duo also writes the show.

Its second season is currently airing. Check out the trailer below:

Inspired by the life of stand-up comedienne Patricia “Ms. Pat” Williams, the series is a fictionalized version of the performer’s life conceived by comedian and playwright Jordan E. Cooper. When it debuted on BET+ last year, the show was an immediate hit, earning 100% on Rotten Tomatoes.

Critics and audiences alike were drawn to the show, which not only features plenty of laughs but tackles many topics families around the country are talking about today, including gender identity, pronouns, school shootings and more.

The second season of “The Ms. Pat Show” premieres Aug. 11th on BET+.