“Sherman’s Showcase,” IFC’s Emmy Award-winning musical comedy series, is coming back for a second season. New episodes are also set to include a slew of guest stars, including the EGOT-winning John Legend and Issa Rae, creator of HBO’s “Insecure” and “Rap Sh!t.” Legend also serves as its co-executive producer, alongside co-creators and co-stars Bashir Salahuddin and Diallo Riddle.

The IFC series, a musical variety show parody that lampoons classic performance and dance TV programs like “Soul Train,” “Solid Gold” and “Laugh-In,” will make its return on Wednesday, October 26, according to Variety. In addition to IFC, “Sherman’s Showcase” will also be available on AMC+.

Season One of “Sherman’s Showcase” premiered on IFC in July 2019, with eight episodes. Salahuddin stars as Sherman McDaniels, the host of the titular variety show, who recalls the show’s past performances of fictional artists performing irreverent, fictional songs like “Drop It Low (For Jesus)” and “Add Some Kente.” It also features cast members in exaggerated portrayals of real-life stars like singer Mary J. Blige. 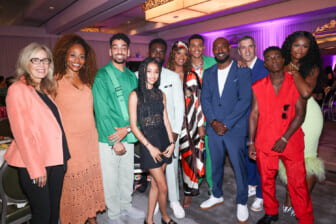 In addition to Season One, “Sherman’s Showcase” aired a one-off 60-minute special, “Black History Month Spectacular,” which won the series an Emmy Award for Outstanding Costumes For Variety, Non-Fiction Or Reality Programming in 2021. The show’s entire first season can now be streamed on Hulu.

Salahuddin and Riddle are also the co-creators and stars of the HBO Max comedy series, “South Side,” which was renewed for a third season in February.