When it was announced that Jon Batiste would be leaving his post as bandleader at “The Late Show with Stephen Colbert,” few were surprised. The musician was just months removed from his big night at the 2022 Grammy Awards, winning five trophies out of 11 nominations, including Album of the Year for “We Are.”

So, what was next for Batiste with more time to expand on his plateauing success and notoriety? One thing was a staggeringly ambitious performance at New York’s Carnegie Hall.

On Thursday, Batiste premiered “American Symphony,” a sprawling musical suite featuring an expansive ensemble of musicians and vocalists. With Batiste suggesting Black-tie attire to the audience before the concert, the sight of a packed house full of elegantly dressed concertgoers of various ages and races at the Stern Auditorium-Perelman Stage elevated the pageantry and importance of the performance.

At just over 90 minutes, Batiste’s “American Symphony” was not only a triumphant amalgamation of musical influences from throughout the African diaspora, but also a love letter to the infectious sound of New Orleans, his home city, that he wears on his sleeve at every turn.

Chris Spencer was the master of ceremonies for the evening. The acclaimed stand-up comedian got the crowd in the right mood to prep for Batiste’s arrival with jokes about his wife and kids, his friendship with fellow comic Kevin Hart, and the pitfalls of keeping up with Hart’s lavish lifestyle.

Spencer introduced Batiste to an uproarious ovation. The pianist emerged from the back of the concert hall, walking down the aisle to the unrelenting applause, sporting an all-blue tuxedo and his signature smile. 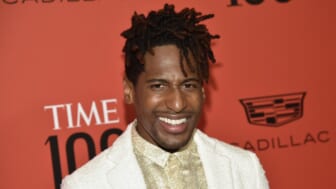 Batiste then kicked in the overture of the symphony, which started with a pulsing beat from the cellos, basses and brass. Accompanied by the sampled sounds of ringing bells and crashing ocean waves, they established an intriguing build of tension. A male singer began wailing over jangling acoustic guitar strikes as other vocalists sang lyrics that included the words “we shall overcome.”

Before the end of the opening, Batiste and the 64-piece ensemble unleashed the two-bar melody motif that would reemerge for the rest of the night. From there, Batiste, orchestrator Matt Wong and conductor Glenn Alexander II launched into the piece.

“American Symphony” consisted of four movements: capitalism, integrity, globalism and majesty. Like with any symphony — particularly by Duke Ellington and Billy Strayhorn, who were Batiste’s chief inspirations — it told a story. A story of the growth of the construction of a system, the heroism of everyday people, how ancestral lineage influences the world, and the empowerment of “supernatural folklore belief,” as Batiste wrote in the playbill.

From one movement to the next, the piece was a feast of styles, genres and subgenres.

At one point, Native American vocalists and drummers played and sang, a likely nod to New Orleans’ deep-rooted tradition of featuring Mardi Gras Indians (the melding of southern Blacks with Native Americans). At another moment, Latin Jazz could be heard with the alluring polyrhythmic drummer and the swaying strumming of guitars and mandolins. At the same time, the audience clapped to the beat of castanets.

One of the most memorable points of the evening came just over halfway through when Batiste vacated his Steinway grand piano and played the motif on an Oberheim OB-X8 keyboard, all while surrounded by musicians playing a Prophet-10 and SP 1200 drum machine and sampler.

“Where I’m from, we don’t sit down when we play this kind of music,” Batiste told the crowd, prompting them to stand and clap along. Some in the audience even danced in the aisles, and with good reason. The sound and atmosphere of the symphony were less like classical music and more reminiscent of early 1980s electro-funk like S.O.S. Band’s “Just Be Good to Me” or Yarbrough and Peoples “Don’t Stop the Music.” 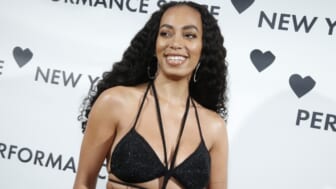 Batiste was at his jovial, enthusiastic best self all evening. Never once did the smile leave his face, whether he was tinkering on his grand piano or joining the percussions in the back of the stage. His contagious exuberance is the only thing that could outshine the musical mastery on display throughout the evening.

After the final movement and a standing ovation, one of three during the performance, Batiste delivered an encore that ended with a piano rendition of “The Star-Spangled Banner” in the only way it could’ve been done: Mardi Gras style.

The New Orleans flavor Batiste infused in the feverish piano flourishes on the national anthem was the perfect way to close out a night that honored how much New Orleans music encapsulates various influences from all manor of sources. It illustrated delightfully, yet poignantly how much the diaspora influences this nation.

Batiste’s “American Symphony” reminded the audience about the bittersweetness of American life, and all who attended were richer for it.