Brandy hospitalized after reportedly suffering a seizure; gives update, thanks on Twitter

The Grammy Award-winner reportedly suffered a seizure at her Los Angeles home on Tuesday.

Brandy was admitted to the hospital after possibly suffering a seizure, TMZ reports.

The singer was apparently at her Los Angeles home on Tuesday when the medical incident occurred. Emergency Medical Services (EMS) was called to the residence at noon to transport the 43-year-old “Cinderella” star to a local hospital.

She recently posted a message on Twitter, expressing gratitude to her circle for supporting her. “To my beloved fam, friends, and starz thank you for sending love and light my way,” she wrote. “I am following doctors’ orders and getting the rest I need due to dehydration and low amounts of nutrition. Thank you for your prayers and support. Grateful for you all, see you soon.”

The Grammy Award-winner‘s parents were by her side at the hospital, according to TMZ. She is expected to make a full recovery.

Brandy’s public profile has increased since 2020. After not dropping an album since 2012’s “Two Eleven, in 2020 she released her seventh album, “B7.” The album included “Love Again,” a duet with singer-songwriter Daniel Caesar that was nominated for a 2020 Grammy Award for Best R&B Performance.

In August 2020, Brandy joined fellow Grammy Award-winning songbird Monica for a Verzuz battle. The online event garnered an impressive 1.2 million viewers on Instagram, according to Billboard. In 2021, Brandy starred in ABC’s musical drama series, “Queens,” alongside Eve and Naturi Naughton. Also that year, she served as a mentor on NBC’s “The Voice.” 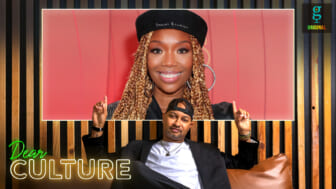 This past February, Brandy sang the national anthem during the NFC Championship game between the San Francisco 49ers and the Los Angeles Rams. She joined Mariah Carey for a MasterClass during which she contributed new background vocals for a re-recording of Carey’s 1997 single, “The Roof,” according to People. Carey released an official video of their collaboration last month.

Brandy made a surprise guest appearance at the 2022 BET Awards in June. She joined Jack Harlow for a performance of his single, “First Class,” during which she recited the infamous freestyle rap she put over the beat in May after Harlow claimed to not know her music.

It is not clear whether Brandy is still in the hospital.